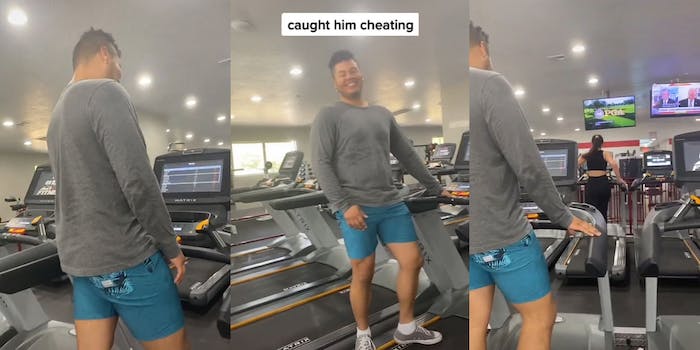 ‘I would break up w him’: Woman flames boyfriend for working out directly behind another woman on treadmill, sparking debate (updated)

A viral TikTok in which a woman seemingly jokingly accuses her boyfriend of “cheating” based on where he was working out at the gym has sparked debate online.

@char.ityk shared a short video to TikTok earlier this week with the text overlay “caught him cheating.” In it, she shows a nearly empty gym before panning the camera to where her boyfriend stands on a treadmill watching her. Another woman runs on a treadmill in the row of equipment directly in front of him.

“Guys, out of all these treadmills, my boy is going behind the ass,” she says.

@char.ityk WHAT WAS THE REASON? #fyp ♬ original sound – ckekahu

The video was viewed over 2 million times. The TikToker’s reaction left some viewers confused and uncertain as to whether the video was a joke, or if she really thought that amounted to something worth being upset with him over.

“What if he was there first,” @divine.wolf asked.

“From personal experience, I have one machine and I stick to that particular machine lol I know how it works, it doesn’t wobble, etc,” @madikthomas added.

But an overwhelming number agreed that this was a problem.

“I would break up w him,” @xosanriogirl wrote.

Ultimately, @char.ityk posted an update admitting she may have overreacted, and eventually realized that every time they go to the gym together, her boyfriend hops on the treadmill behind the first TV because it plays sports.

“I think I just saw that he was running behind a female, and I took it as a perfect opportunity to act crazy. But there was no need to because he wasn’t there for her,” she says.

Update 10:41am CT, May 26: When reached for comment by the Daily Dot, @char.ityk said that “He chose that treadmill for the TV before everyone else left. I went to the bathroom and when I came back everyone else had left.”

“They actually ended up being the only two left running and he’s actually a sweetheart and wouldn’t do this irl intentionally,” she continued.