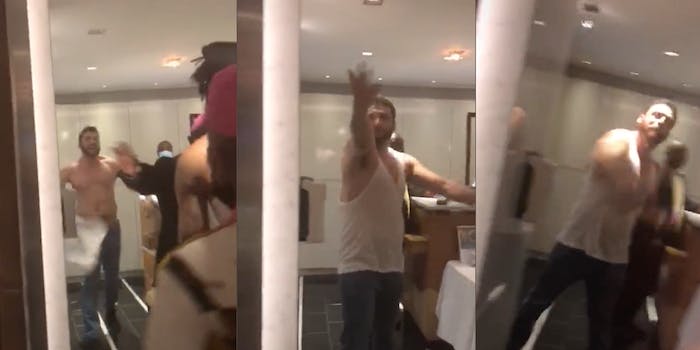 A TikTok video showing a man taking off his clothes while yelling racist and homophobic slurs at Beyoncé’s choreographer has gained serious attention on Twitter after the original was removed from TikTok.

Originally filmed and shared by choreographer Jonte’ Moaning (@hellojonte) on his TikTok account, the video shows a tall caucasian man yelling racial and homophobic slurs, including the N-word, at Jonte and his friends, who are Black, while stripping in front of a security guard as the cameraman and his friends walk away.

Jonte’ Moaning has notably created choreography for artists like Beyoncé and BLACK PINK, among others.

The video has also been shared by @TimTweeting, where it gained similar responses.

Not a lot can be heard over the incoherent yelling of the man and non-confrontational replies of the men in this video. His body language, according to commenters, strongly resembles that of someone on methamphetamines— “tweaking.”

“That right there is the tweaker shuffle,” Twitter user @NoobHammer3000 wrote.

“Why would you take your shirt off while simultaneously saying hate-filled homophobic words?” @fomalicious asked on Twitter.

“The best way to prove you’re not gay, when confronted by a group of men is to remove your clothing and let the gay men see you naked,” @Crackeur wrote.

The man was compared to Hugh Jackman, too, given his physical appearance.

The Daily Dot has reached out to Jonte’.