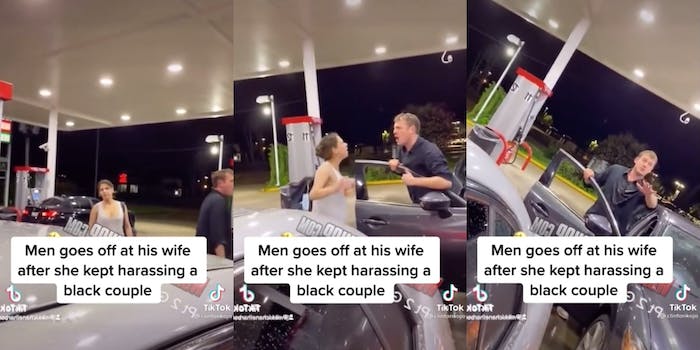 ‘You don’t know anybody around here’: Man intervenes after his Karen wife harasses a Black couple

The Karen accused the Black man of being a 'crack dealer.'

Recirculated video footage from June shows a man going off on his wife, dubbed a “Karen,” for harassing a Black couple at a gas station.

Originally shared to TikTok then YouTube, the footage was reposted Saturday in the subreddit r/PublicFreakout by Redditor u/thebaguettebitch. It garnered 19,000 upvotes and more than 1,000 comments in five hours.

“Fuck you. Get in the car,” the man says directly in his wife’s face. It’s unclear what sparked the interaction between the two couples.

The Black woman, who appears to be recording the footage, cackles and yells, “Erin get your stupid ass in the car. Get in the car, Erin.”

The Karen, aptly identified as Erin, says something unintelligible, prompting her husband to repeat, “You do not know him. You do not know her. You don’t know anybody around here. You are not special. Get your stupid ass in the car.”

Erin snapped back saying the Black man was a “fucking crack dealer.” Her husband asked why she thought that—because the man was driving a “fucking Buick”?

During the exchange, the Black woman can be heard giggling as she recorded.

Erin threw what appeared to be her drink on the concrete before walking away across the gas station. At that point, the man turned to the Black couple to apologize for his Karen wife’s behavior.

The two men had an unintelligible verbal exchange, while the Black woman laughed and told Erin to get in the car again.

While unsurprised that another Karen had struck, Reddit viewers were shocked at her blatant unapologetic demeanor throughout the altercation.

“She doesn’t look embarrassed either, just seriously pissed off and frustrated that she’s not getting support for her racism,” one user commented. Another viewer replied, “The only thing on her crazy mind is the fact that her husband is calling her out for her racism and not supporting it.”

“She’s pissed because she was trying to write a check that she expected her husband to cash and her husband wasn’t having it. It looks like that wasn’t his first rodeo with that,” someone else wrote.

While most viewers could agree that Erin’s behavior was atrocious, some folks said the videographer’s constant laughing wasn’t helping the situation.

Another said, “While Erin is obviously a racist twat, this whole mentality of recreating Jerry Springer episodes for every moment in life just for laughs is why we’re doomed as a society. The camera lady’s giggling and taunting was just as annoying.”

However, some commenters were quick to shut down the critiques of the Black woman’s reaction, explaining that she was responding to a ridiculous but scary situation.

“She may be laughing, but being a black couple getting harassed by a white person is scary,” one person argued. “Anything could happen and bystanders are much more likely to take the white woman’s side before asking for context. I know that when I’m amped up from adrenaline during a confrontation, I can’t help but constantly talk to help ease my nerves.”

Still, several other viewers applauded the Karen’s husband for standing up for the Black couple and trying to silence his wife.

“I love how this dude apologized to this black couple. Such a humble person, and to [his] wife she’s totally racist ! She truly deserve it ! A shameful woman deserves a shameful moment !” one viewer said.