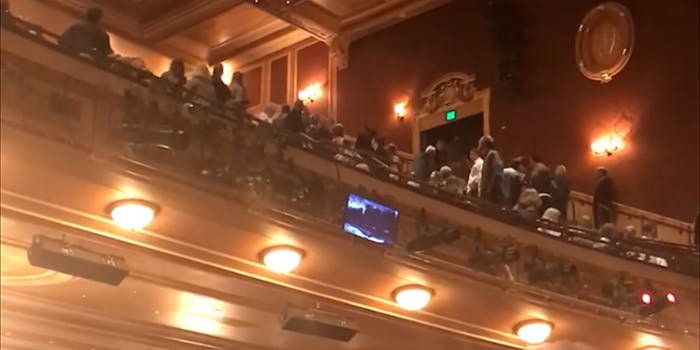 Audience members at a Baltimore production of Fiddler on the Roof were disturbed on Wednesday when a man began yelling pro-Hitler and pro-Trump salutes.

The second night of the play’s run at Baltimore’s Hippodrome Theatre was going as scheduled until a man stood up in the balcony and started shouting during intermission. “Heil Hitler! Heil Trump!” he yelled, looking down on the audience below. Fiddler on the Roof tells the story of a Jewish family in tsarist Russia, as the main character’s daughters find husbands, and the family faces persecution for their Jewish heritage.

One of the people in the audience, Rich Scherr, told the Baltimore Sun that people immediately started running for cover. In the wake of the deadliest anti-Semitic attack on American soil last month, in which 11 people were killed at the Pittsburgh Tree of Life synagogue, such a response is reasonable.

“I’ll be honest, I was waiting to hear a gunshot. I thought, ‘Here we go,’” said Scherr to the Sun. Police were called and, within a few minutes, arrived and escorted the man out of the theater. However, the police say they did not arrest the man for his disturbance and let him go.

Although the play went forward without any further incident, Scherr said the fear of what may have happened hung with him. “My heart was just racing,” he said. “I didn’t even really pay attention to the second act.”

This incident is one of many in a recent rise in anti-Semitism in the United States. Besides the shooting at the Tree of Life synagogue, there have been numerous hate crimes, ranging from a man who tried to burn down his apartment building to kill his Jewish neighbors, to violent anti-Semitic graffiti in a historic synagogue. In Maryland alone, anti-Jewish hate crimes rose 47 percent in 2017.