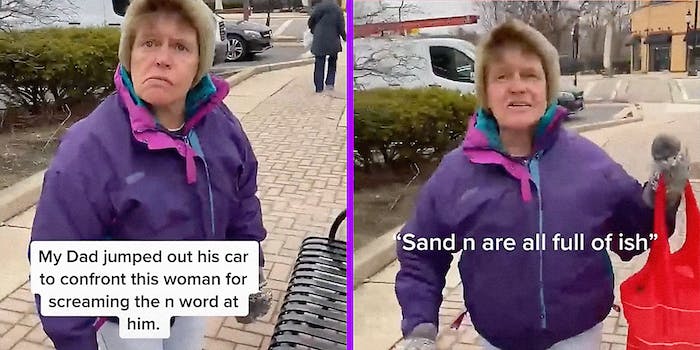 ‘We can make it newsworthy’: TikToker exposes racist woman calling her dad a ‘sand [N-word]’ after confrontation

'Can I have you on video talking that?'

A TikToker recorded a violently racist elderly woman in Illinois calling him a “sand n****r” after he confronted her about her use of the slur.

Posted by his daughter, @imani.nirvana, the video takes place in Chicago suburb Arlington Heights, Illinois. The caption reads: “Some random woman screamed the N word at my father yesterday.” As the video begins, the man has already gotten out of his car and is recording the woman, who seems nonplussed at some random man pointing a phone at her.

“Can I have you on video talking that?” he asks. “What you called me when I drove by just now?”

An experienced racist, she goes right to gaslighting the offended man, saying “It’s all in your head.”

He tells the violent racist he heard her call him a slur.

And then, as violent racists do, she went from 0-100 with the nonsensical racism: “We can make it newsworthy; you can have a crucifixion and a killer with a big, black n****r.”

It’s an incredibly specific scenario that arrived unprompted. She seems pleased with herself as she walks away with her bag.

In a subsequent video, @imani.nirvana explains that her father went out of his way to record the racist woman to illustrate the still-existent anti-Blackness in America.