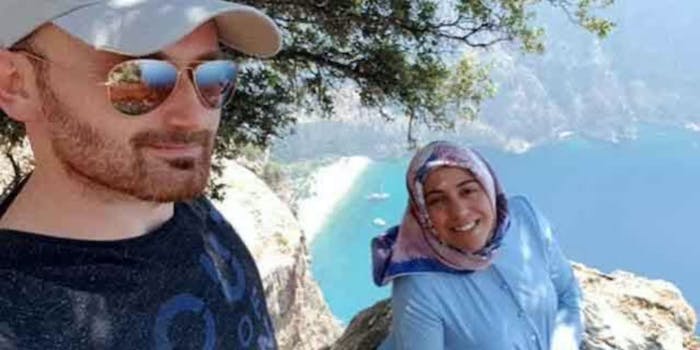 A Turkish man allegedly pushed his pregnant wife to her death after they posed for pictures together on the cliff in 2018.

Prosecutors allege Hakan Aysal, 40, killed Semra Aysal, 32, for her life insurance. The couple was on a vacation in Butterfly Valley in Mugla, Turkey, when Hakan allegedly pushed Semra, who was 7 months pregnant, off a 1,000-foot cliff, according to the New York Post. She reportedly died instantly.

The two had been taking selfies together at the cliff. According to the Sun, prosecutors say the couple sat on top of the cliff for three hours so that Hakan could ensure they were alone before allegedly pushing her.

Prosecutors say the killing was premeditated, not an “accident.” Hakan, however, is claiming it was an accident.

“After taking a photo, my wife put the phone in her bag. … Later she asked me to give her the phone. I got up and then heard my wife scream behind me when I walked a few steps away to get the phone from her bag,” he reportedly said during court. “When I turned back, she was not there. I did not push my wife.”

The investigation is reportedly ongoing, and a court ruled that Hakan remain in custody for premeditated murder.