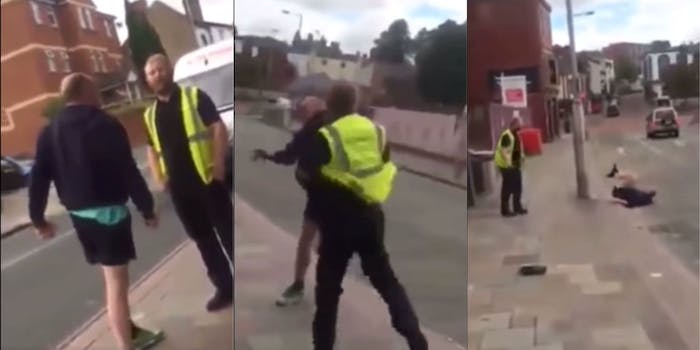 He literally beat the man out of his shoes.

A video trending on Reddit shows a man in Wales knocking out a stranger after he bragged about “fiddling” kids.

In a backdrop identified by a Redditor as Wrexham in northern Wales, two men square off on the sidewalk while the videographer talks to another unseen person. It’s not clear what prompted their face-off, but the man in the hoodie is acting belligerent and appears intoxicated.

Redditor u/ashdoherty, who posted the video, also provided a translation of the dialogue for viewers who couldn’t understand the Welsh accents:

“You’re an idiot you’re working on a Saturday”

“Yeah cos I’ve got a fucking job, I’ve got kids to pay for”

“I sell Mamba to your kids (drugs)”

“What the fuck are you on about, is that drugs is it?”

“Listen, I FIDDLE (UK slang for sexual touching, deriving from kiddy fiddler which means pedo) with your kids!”

As the man in the safety vest walks away from the carnage, he spares a few words for his victim: “Fucking prick, fiddling with these fucking kids.”

As he turns around and sees the woozy man picking up his shoe, he reminds him of the thrashing he just received: “[Do that again] and I’m gonna put you in a fucking hospital. I fucking warned you.”