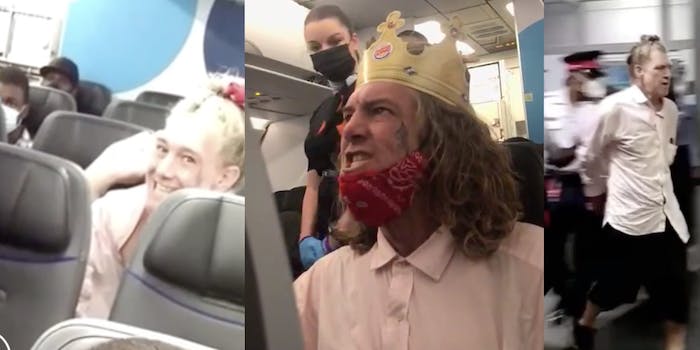 The man, who is sporting a Burger King crown, can be seen melting down in multiple videos.

A video has surfaced showing a white man repeatedly screaming the N-word, laughing at, and even taunting those around him—mostly Black passengers—while he’s seated on a plane.

A series of videos of the incident were shared on numerous social media platforms, such as Facebook, Reddit and Twitter, where they’ve been viewed thousands of times.

Facebook user Junior Campbell posted a video of the incident on Wednesday. The video starts with the man screaming at a Black woman, amid what appears to be an already chaotic situation inside an airplane.

According to Jamaican newspaper the Den, the incident took place on a New York-bound flight from Jamaica; the flight was reportedly delayed due to the incident.

In Campbell’s video, the man is seen screaming “I won” at a Black woman, though, it is not clear what he’s referring to. A few seconds later, a crew member is heard announcing that they are waiting for the police.

He then screams the N-word five times loudly.

Then he screams, “Clearly, I just did.”

“Clearly, you have no f*cking authority,” he says to the crew member, claiming that someone attacked him and that the flight attendant “didn’t do shit.”

“Fuck you and your job, b*tch!” he says to her, drawing gasps from spectators.

He then threatens the Black woman with “two felonies” and calls her a “fata**.” He also challenges others on the flight to fight him.

“Who’s next, motherf*ckers?” he screams repeatedly.

At one point, he starts taking his shirt off. He goes on to say the N-word at least three more times and calls people on the flight “f*ggots” repeatedly.

Another video shot from a different angle shows him wearing a Burger King golden paper crown.

“She kicked me in the stomach,” he screams, while claiming that the seat he’s in is his seat.

“I’m part West African. I can say anything I want,” he screams later.

Throughout the video, he appears to be taunting those around him with his facial expressions.

In another video on Twitter, he’s seen screaming, “Take your shit. Get the f*ck out of my seat.”

When someone says, “Sir, please stop,” he laughs menacingly at the camera, before screaming the N-word again.

According to the Den, the situation exploded over a misunderstanding about seating regarding him and a Black female passenger. It’s not clear if this is the Black woman he was seen screaming at in the video.

“All of you guys on this plane are N-words, you’re a N-word, you’re an N-word,” he said, according to the Den. “And I can say the N-word anytime I want to.”

The flight was reportedly full of Jamaican people. In a follow-up video posted by Campbell, the man is seen being escorted out by the Jamaican police, while people around him cheer and applaud.

People on social media are infuriated at his bigotry and entitlement.

“I don’t say this with any type of arrogance or misplaced bravery,” wrote one viewer on Twitter. “I would have gotten as close to him as possible and beaten the the dog shit out of him and I am in awe that no one on that plane did.”

The man was expected to leave Jamaica by Thursday.