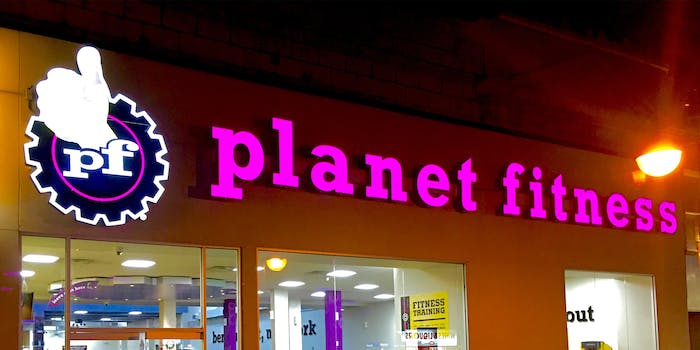 People can't hate on his excuse.

A man was arrested on Sunday afternoon after stripping naked for his workout in a crowded Planet Fitness in Plaistow, New Hampshire.

The man, identified by police as 34-year-old Eric Stagno, reportedly entered the Planet Fitness, stripped naked, walked around for a bit, then began doing yoga poses on the mats as if it was a completely normal thing to do.

Despite the gym being fairly crowded with people who were pursuing physical fitness with their clothes on, Stagno did not appear to be aware of any wrongdoing on his part. Witnesses say he kept to himself and checked out his very nude body in the mirrors while exercising. Responding officers said they found him “on his knees in a yoga-type position.” While they did find drug paraphernalia in his possession (presumably with his discarded clothes, and not on his person), it wasn’t clear if he was under the influence of any substances.

Stagno didn’t have much to say to the police to explain the decision-making process that led him to naked yoga in a Planet Fitness, but he did say that he thought it was a “judgment-free zone,” referencing the company’s slogan. The internet, however, has quite a lot to say about Stagno’s workout attire choices and the reasoning behind his nudity.

Man is accused of walking into Planet Fitness, dropping his clothes and working out nude. He told investigators he "thought he was in a judgement-free zone."

Here's to hoping he wiped down the equipment afterward.https://t.co/tRS9LOqNkl

A few people even came to Stagno’s defense, not necessarily for his decisions, but for giving them a good laugh.

Most of all, though, people are loving Stagno’s particular definition of a “judgement-free zone” and are gleefully supplying their own versions of how they would use it.

Me: Oh sorry, I forgot to turn the location on. I tweeted that at Planet Fitness. Judgement-Free Zone baby!

Unfortunately for Stagno, even if the internet loves his antics, witnesses and police did not. He was arrested and charged with indecent exposure/lewdness and disorderly conduct and has a trial date set for September.