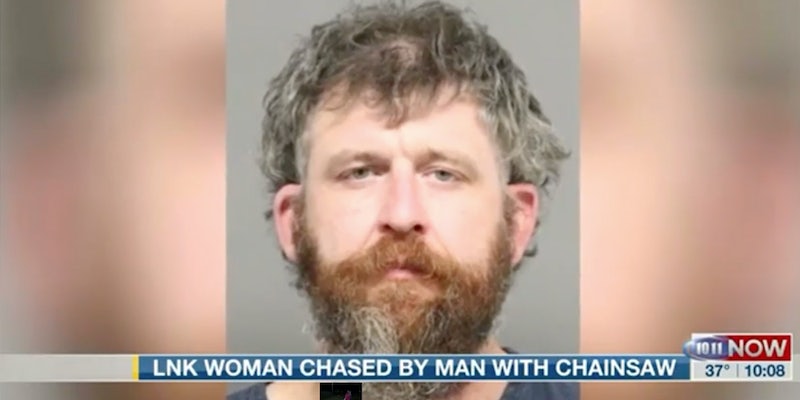 The woman, describing the incident, warned the reporter, "Excuse my language because it's about to get vulgar."

A Saturday incident in Lincoln, Nebraska, involving a man chasing a woman with a chainsaw outside her apartment building “because she was Black” has resulted in felony hate crime charges. On Wednesday, the story topped Reddit’s Public Freakout forum.

According a number of news sources, the incident involved 41-year-old Daniel Stueck, arrested after the incident Saturday, charged on suspicion of making terroristic threats, with a hate crime enhancement for the felony charge.

Stueck encountered Norma Nimox, a 25-year-old Black woman, outside her Lincoln apartment complex and then threatened her with the chainsaw. Stueck, who is white, asserted Nimox was on his property (when, in fact, Nimox was approaching her residence), and told police that Black people had been stealing from him and that Nimox was culpable “because she was Black.”

Nimox gave her account of the incident to KOLN-TV, a Lincoln TV station, which aired Monday. In the video, shared to Reddit’s r/PublicFreakout subreddit, Nimox said she encountered Stueck at her apartment building as she was making her way up the stairs. She saw Stueck on the second floor level of the outdoor staircase with a chainsaw in his hand.

She told the reporter, “He says to me, excuse my language because it’s about to get vulgar, ‘What’s up, n****r.’ He then followed her as she tried to take the back stairs to her apartment, telling her, “Get off my property, n*****r,” and chasing her off the apartment property grounds before stopping.

“The neighbors upstairs say he was starting his chainsaw in his apartment all day,” Nimox said in the KOLN interview. “I guess when he seen me, he just found his victim.”

The KOLN account of the incident noted that Nimox is now concerned for the safety of her and her 5-year-old son, as well as for other residents at the complex. She contacted her landlords, but they hadn’t clarified at the time of the station’s report whether or not he would be allowed to return.

“It’s something that you hear in movies, someone being chased with a chainsaw,” Nimox mused. “It’s just unreal!”

One redditor, commenting on the thread, observed, “I can’t imagine having to live through such a horrifying experience solely because of my race.”

Another, responding to that comment, asserted, “Shit is super fucked up, couldn’t even imagine.”