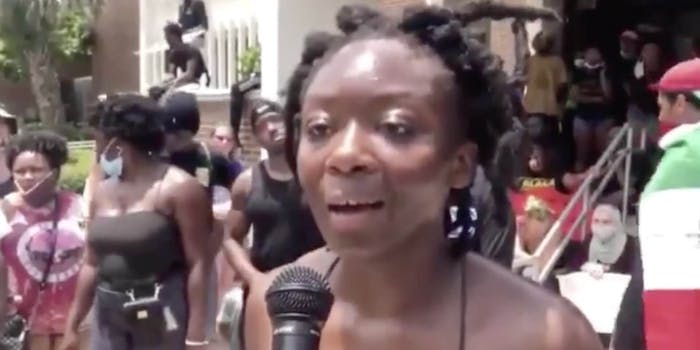 Police say Aaron Glee Jr. admitted to torturing the teen before killing her.

People on Twitter are mourning teen activist Oluwatoyin “Toyin” Salau, a 19-year-old protester whose body was found as the current Black Lives Matter movement gained momentum, after her murderer confessed to kidnapping, raping, and torturing her before killing her.

Aaron Glee Jr., 49, told police that he kidnapped Salau on June 6 after the two met at a bus station in Tallahassee, Florida, when Toyin shared with him about having been sexually assaulted earlier that day.

Glee reportedly offered her a place stay the night and freshen up, and then called 75-year-old Victoria Sims, a local volunteer worker, who drove them both to his home.

Glee also confessed to kidnapping and murdering Sims a few days later. He was arrested on June 13.

According to accounts shared by the Tallahassee Democrat, Glee waived his right to remain silent and told officers that he kept Toyin chained in his home for days, raping her during that time. He released her from the chains to let her bathe and eat.

He eventually killed Toyin by chaining her in a manner that he believed would cause her death. According to the Democrat, Glee said he checked on Toyin every few hours to see if she had died until she did.

Both Toyin and Sims’ bodies were found on June 13. Police had tracked Sims’ phone to Glee’s house, though he was on the run by then. He was later arrested by Orlando Police Department before being taken to an Orlando hospital due to breathing complaints.

At the hospital, he gave police the graphic details of his crime.

“We owed her more,” one user wrote. “#SayHerName and destroy the evil system of capitalism that killed her.”

“A 19 y/o beautiful activist who showed up at every protest she could,” wrote another.

“It physically hurts to think about how scared and in pain she was the last few days of her life,” Women’s Republic magazine founder Sai Sailaja Seshadri wrote. “She was a baby. She deserved so much better.”

For many, it was a reminder that Black women are disproportionately victims of domestic violence, rape, and homicide.

“We as a collective need to do more to protect black women and the black community in its entirety,” one user wrote. “The system is failing us. We’re failing them. make the change.”

On Monday, many Twitter users warned readers to be prepared for the graphic details of the nature of her kidnapping and death:

“If you see the articles describing the rape and murder of Toyin Salau, please PLEASE proceed cautiously and DO NOT read it unless you’re absolutely sure it won’t bring any triggers,” Seshadri wrote.

Glee is facing charges of kidnapping, murder, and sexual assault, according to BuzzFeed News.