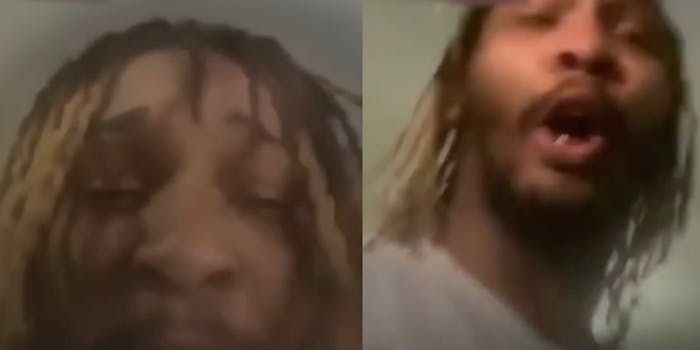 Man live-streams himself on Instagram after allegedly killing girlfriend, her mom

In the stream, Nathan Rashad James apologizes and can be heard wailing.

A man live-streamed himself apologizing and walking around with a gun after allegedly killing his girlfriend and her mother in Texas on Sunday.

Nathan Rashad James, 24, reportedly died by suicide after fatally shooting Marietta Matthews, 26, and Tamiko Merriwether, 55 at a Dallas apartment where they lived, according to CBS DFW. In a clip from his live stream, which was broadcast on Instagram and shared by the Daily Mail, James paces up and down with what appears to be a gun and can be heard wailing. He also says he is sorry and that “he tried to leave.” “Oh my God, bro,” he says in the clip. “This shit is crazy, dog.”

Dallas Police Department officers responded to a report of an active shooter at the apartment around 4:30pm, and James allegedly opened fire on them. A SWAT team later arrived and unsuccessfully tried to get James to surrender. When officials entered the apartment at 7pm, they found James, Matthews, and Merriwether deceased.

The case is reportedly still under investigation by the Dallas Police Department.