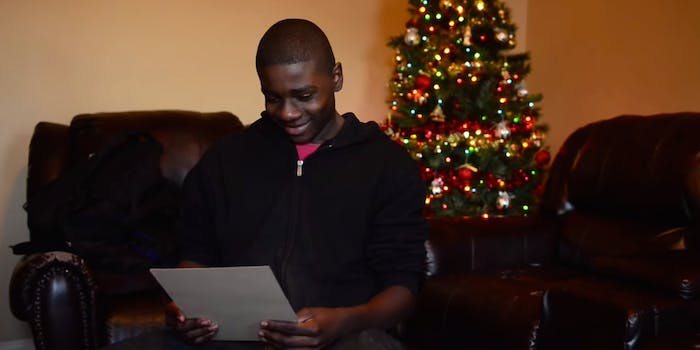 President Obama personally responded to this teen’s letter to Santa

He had one simple wish for Christmas.

A Chicago teen wrote to Santa Claus this Christmas, but instead he heard back from someone he wasn’t expecting.

Malik Bryant, a 13-year-old from the crime-ridden neighborhood of Englewood, was one of around 8,500 Chicago Public School students who participated in a program run by the Chicago nonprofit DirectEffect Charities. The students were asked to write letters to Santa, which were then distributed to kind-hearted people around the city who would then purchase the gifts on their lists.

Bryant wrote his letter like everyone else, but his request was simple.

It was unlike anything anyone at DirectEffect had seen.

“When I pulled this one letter from a seventh-grade class at an Englewood elementary school, I couldn’t stop reading it,” DirectEffect CEO Michelle DiGiacomo told the Chicago Sun-Times. “All this kid was asking for was safety. I was floored.”

Determined to get him something, the charity reached out to Bryant’s teachers and posted the letter to Facebook for gift ideas. But the letter was still on DiGiacomo’s mind. She passed it along to her congressman, Rep. Michael Quigley (D-Ill.), who then agreed to forward it to the White House.

Nobody, least of all Bryant, expected President Barack Obama to respond himself.

I want to offer you a few words of encouragement this holiday season.

Each day, I strive to ensure communities like yours are safe places to dream, discover, and grow. Please know your security is a priority for me in everything I do as President. If you dare to be bold and creative, work hard every day, and care for others, I’m confident you can achieve anything you imagine.

I wish you and your family the very best for the coming year, and I will be rooting for you.

While Bryant appreciates the president’s words, it still doesn’t change anything. He still still lives in a dangerous neighborhood where he can’t play outside without fearing for his safety and where he’s seen the body of someone he knew dead on the street.

“I’m surprised, like, he wrote it, but it’s not going to solve safety reasons out here,” he said. “It’s still dangerous.”

DirectEffect is in the process of helping Bryant’s family find housing in a safer neighborhood.