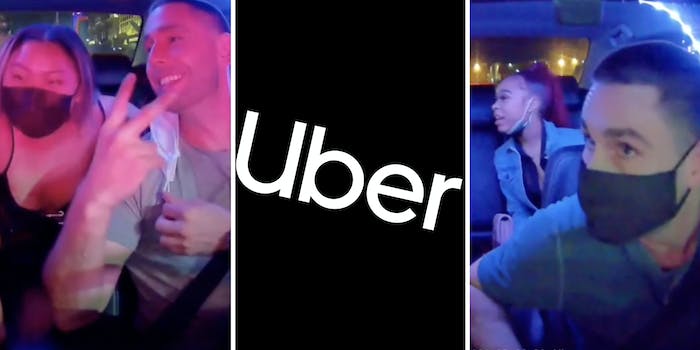 ‘If guys did this to a girl Uber driver it would be on the news’: Male driver films himself getting hit on by female passengers who get in car, sparking debate

A TikToker and Uber driver sparked debate on the platform after posting a video showing multiple women flirting with him as they ride in his car.

User Pasha (@yxotictv), who is an Uber driver based in Las Vegas, posted the video three days ago. In the days since, the video has racked up over 4.3 million views and inspired considerable discussion and debate.

In the video, several women appear to flirt with Pasha, either inviting him to drinks or being generally complimentary. One woman asks Pasha to give her friend, who is sitting in the backseat, a lap dance. “You just want to park, and come hang out with us,” another woman in a different group says to him.

At first, some were envious of Pasha.

“Man is living my dreams,” one user said.

“How’s it feel to be what I’ve always aspired to be,” a second stated.

“This makin me wanna become a Uber driver,” a third added.

However, the conversation quickly turned into accusations of a double standard, with many users saying that, had Pasha been a woman and the customers been men, the reception on TikTok would be substantially different.

“Imagine if guys say this to a women taxi driver,” a commenter said.

“If it was a guy who did this he would be canceled immediately,” another claimed.

Other alleged Uber drivers chimed in to say that this is a common occurrence.

“The amount of time this happened, even to me, was ridiculous,” one commenter said.

“This happened all the time when i drove Uber,” another wrote.

The Daily Dot reached out to Pasha via TikTok comment.