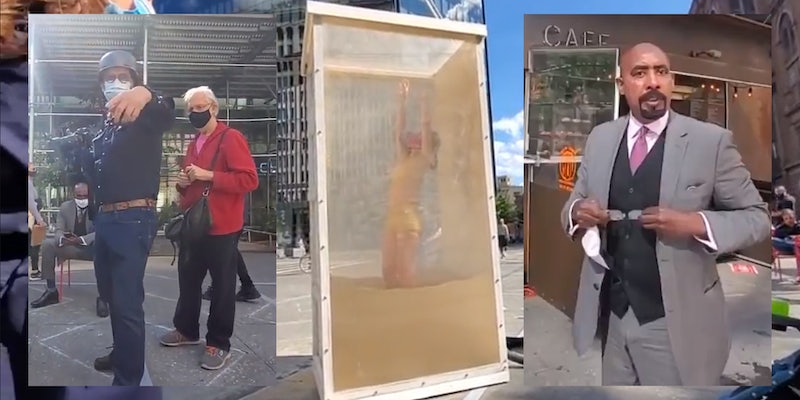 A new Reddit video shows an insufferable male Karen—a “Daren”—getting angry over being asked to wear a mask and getting punked for being a bully.

The male Karen films himself harassing pedestrians near the Alamo, a cube-shaped sculpture located on Astor Place in Manhattan’s East Village neighborhood. People are trying to enjoy a performative art piece that features a woman inside of a glass case half-filled with sand.

Daren, as he is dubbed on Reddit, talks rudely to the other spectators and throws down a handful of masks offered to him.

“Why are you sticking that in my face?” he asks. “What are you, crazy? Get the fuck out of here.”

By this point, it’s clear this male Karen is looking to pick fights. He has his camera on, and he’s being as loud and obnoxious as he can.

Another man, a security guard, also recommends Daren wear a mask. Daren rebuffs the request and threatens him: “I’m on a city street, you can recommend whatever you want. And don’t come within six feet of me, or I’m gonna start screaming at you.”

The guard walks away, realizing he has to do his job without putting hands on anyone unless physically threatened. He does, however, demand that Daren take his camera out of his face, which is just what he wanted to hear.

Then, after clearly trying to put distance between himself and the agitated guard, Daren yells, “I will kick your fucking ass, sir!”

As the male Karen walks back toward the security guard, another man in a suit approaches him, telling him to cut it out. He’s wiping down his glasses but ready for action.

Daren asks who the suited man is, to which he replies, “Someone who doesn’t like bullies.”

Daren feigns a gasp and says incredulously, “I’m the bully?”

He begins to yell something else in protest but notices a man with a tripod coming toward him and telling him to leave. Realizing no one is having any of his foolishness, Daren gives an exaggerated grunt and ends the film.

Redditors were big fans of the suited man who told off the male Karen.

“That guy at the end came up on him with some ‘I’m in charge here’ energy. Scared him away quick,” one user commented.

Another user took the bait and riffed on the classic ZZ Top song: “Had him running as fast as he can, ’cause fellas stow crazy round a sharp dressed man.”