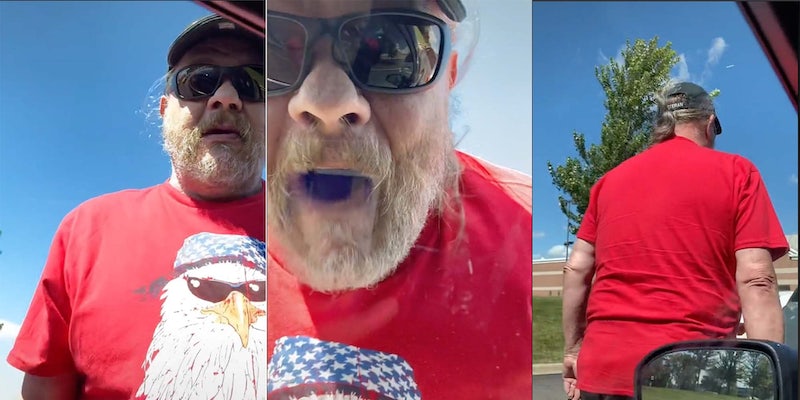 ‘Your Black Lives Matter sh*t don’t mean crap to me’: Male Karen runs TikToker off the road over bumper sticker

In a TikTok posted Wednesday by user @liz_HK, she said a man attempted to run her off the road two times because of her Black Lives Matter bumper sticker.

“The police scolded me for following him to get his license plate,” @liz_hk wrote in the overlay text of the video. “They offered no other help.”

In the video, the man pulls over slightly in front of @liz_hk, gets out of his car, and yells at her. She has her window closed.

“Don’t follow me around acting like a cunt,” the man yells. “Your Black Lives Matter shit don’t mean crap to me.”

The man also says that he fought in Iraq and Afghanistan protecting her “bitch ass.”

“You need to fuck off,” he tells her.

“[Whose] uncle is this?” wrote @liz_hk in the video’s overlay text.

Commenters were worried for @liz_hk’s safety after the response she got from the police.

“That’s scary even more so because the police didn’t help,” commented @dancing_ker_bear. @liz_hk responded saying she “couldn’t believe he was allowed to act like this with zero consequences or concern from the police.”

“I’m thinking TikTok will do more than the cops,” wrote @constantlyclaud_13.

Interestingly enough, another woman was shown being run off the road in other TikToks posted on the same day by @phototiztik.

The man who ran the woman off the road apparently also hit her car and went on to berate her afterward.