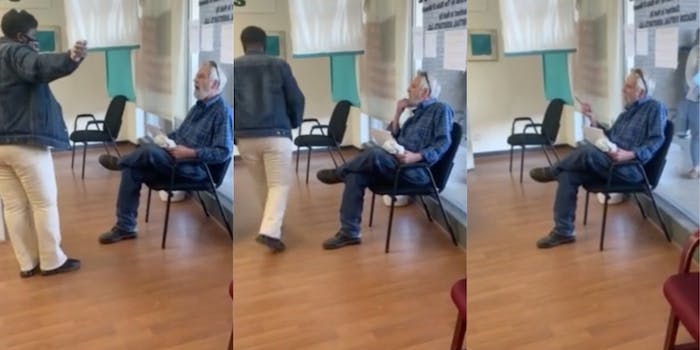 'Those people were enslaved physically, but their minds were free.'

A wild video on Reddit shows a male “slavery expert Karen” arguing that more people are enslaved by face mask mandates during the ongoing coronavirus pandemic than during antebellum-era slavery.

The video starts with the employee and the racist male Karen in a verbal altercation. She is demanding he leave the premises since he’s not wearing a mask.

“Get out of my face,” he says, attempting to dismiss her. “If you’re so worried about your health, why are you coming up on somebody who’s not wearing a mask?”

This has been a ridiculous talking point for some supporters of outgoing President Donald Trump, and even some within his administration. In September, Attorney General William Barr compared the coronavirus lockdown to slavery.

Later, the male Karen continues to argue technicalities as if he has a say in a place of business: “A guideline is not law.”

“Slavery expert Karen” says he will leave once he’s processed. However, just as the video ends, the fed-up employee informs him that he will not be served.

It should go without saying that slavery was a brutally oppressive machine that extracted wealth through human commodification. Slavery helped industrialize the economies of America, England, and France, among other countries. The idea that slavery and mask mandates are remotely comparable is outrageous, racist, and violent. Slaves had no control over their existence, even as objects of sexual desire.

Take this passage from Edward Baptist’s opus, The Half Has Never Been Told:

Of course, Rachel could’ve predicted, from her perspective up on the auction block at Maspero’s in 1819, that the legal right to rape one’s human property would shape not only purchases of slaves but the broader behavior of entrepreneurs in the southwestern markets. For from the beginning of slavery in the Americas, if not before, white men had believed that when it came to enslaved women, purchase promised reward. Male enslavers justified themselves by saying that African-American women were more sexual, less moral, less beautiful, less delicate. Such claims allegedly excused rape, the rejection of children, the sale of lovers, and the practice of forcing black women to labor in jobs for which white women were ostensibly too delicate.