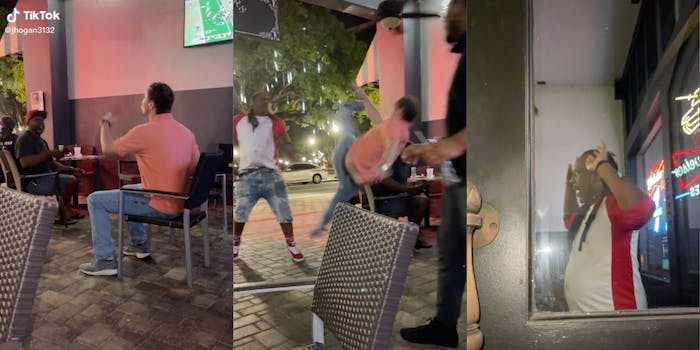 ‘He beat himself up’: Male Karen takes himself down trying to kick another man in viral TikTok

'He waited all his life to do that move, and it failed miserably.'

A viral TikTok video shows a male Karen taking himself out during an altercation with another man.

TikTok user @jhogan3132 posted the footage of an almost-fight at a Linksters Taproom in Florida. A tough male Karen is shown in his chair, not attached to a table, while arguing with another man outside.

“Shut your fucking mouth,” says the male Karen inside the restaurant. He jaws back and forth with the other man until he stands up, and the man standing outside comes swiftly in his direction.

As he approaches, the male Karen throws what would’ve been a hellacious kick, lifting himself off the ground. However, embarrassingly, he connects with air and finds himself on his back.

There’s a brief skirmish, and the male Karen is dragged away by an employee who ends the altercation.

The other man looks into the phone and says, “I ain’t do shit, did I?”

The commenters under the video dunked on the Karen. “Lol he beat himself up,” said one commenter. “He thought he had a chance kicking and missed the mark.”

Another wrote about the male Karen: “He waited all his life to do that move, and it failed miserably.”

“He the only person to fight one on one and come in third place,” said a third commenter.

The Daily Dot reached out to the poster and Linksters Taproom for comment.