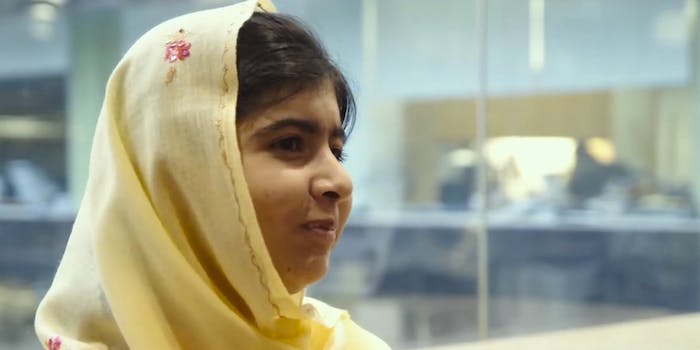 J.K. Rowling sent her regards to Yousafzai on Twitter, too.

Nobel Peace Prize winner Malala Yousafzai will soon be studying in one of the most prestigious universities around the world. The 20-year-old Pakistani political activist was accepted into Oxford University earlier this week, and has announced on Twitter that she will attend.

News first came after Yousafzai announced her acceptance early Thursday morning. “So excited to go to Oxford!!” she wrote. “Well done to all A-level students—the hardest year. Best wishes for life ahead!” Yousafzai will go on to study Philosophy, Politics, and Economics, a highly competitive course that Business Insider describes as “a common thread between many of the most powerful figures in British and world politics.”

So excited to go to Oxford!! Well done to all A-level students – the hardest year. Best wishes for life ahead! pic.twitter.com/miIwK6fNSf

After her Thursday morning announcement, Yousafzai’s tweet has gone viral, with over 22,000 retweets and tens of thousands of likes. She’s since received congratulations from around the world, and prominent figures such as J.K. Rowling and Aseefa Bhutto Zardari have sent her their well wishes.

And of course, her father, Ziauddin Yousafzai, has since wished her congratulations on Twitter, giving gratitude to Allah and thanking all of his daughter’s supporters for helping her.

My heart is full of gratitude. We are grateful to Allah & thank u 2 al those who support @Malala 4 the grand cause of education @MalalaFund https://t.co/Cgro6vpPXV

Yousafzai’s legacy as an activist is an awe-inspiring story. Her career began when she wrote about life under the Taliban for the BBC Urdu. After her identity was revealed, she began advocating for women’s education. But in 2012, the Taliban attempted to kill Yousafzai, leaving her in critical condition after suffering a gunshot wound to the head.

After the attack, Yousafzai became an international figure, as activists around the world gave their support to her story. She was later awarded the Nobel Peace Prize in 2014.