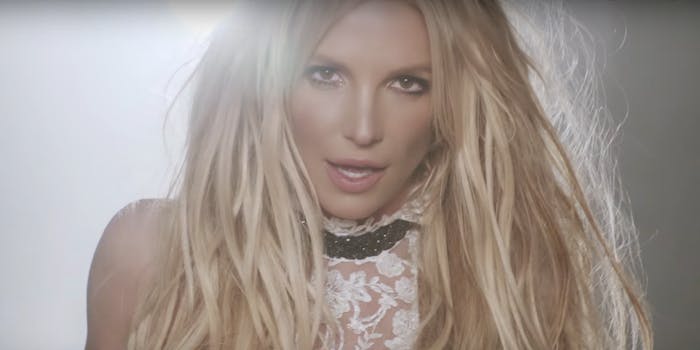 We all remember the Britney-Madonna kiss — that fateful tear in the space-time continuum from the 2003 VMAs is forever seared in the back of our skulls. In the 15 years since, the moment has been consumed, dissected, criticized and lionized every which way, and has generated significant discourse surrounding the male gaze and on-screen displays of same-sex attraction. By now, the kiss has become pop culture lore — but the story has always been about Britney and Madonna’s makeout session, though Madonna shared a kiss with both Britney Spears and Christina Aguilera.

Aguilera has been nearly erased from the narrative, almost comically so. This week, she spoke to Andy Cohen about the Xtina erasure from the infamous performance, and apparently, she doesn’t mind that she’s been left out of the narrative — which is good. In the interview, Christina pointed out the ways in which the kiss fell short. And though the kiss was definitely exploitative, it was also a monumental moment for queer visibility on-screen. The lip-lock reminded us that things can be both good and bad, progressive and harmful all at once.

“It was weird,” Aguilera said of her kiss, which happened a beat after Britney and Madonna’s — but the cameras cut away while it happened. “And you know why they cut away for it? They cut away to get Justin’s reaction. It was a ‘Justin’s reaction’ shot,” she explained. Spears and Justin Timberlake were recent exes at the time, and, the “Fighter” singer told Cohen, “It was a cheap shot.”

I agree with Aguilera, but probably not for the same reasons. It definitely was a low, nosy move to cut to Justin after his ex locked lips with Madonna. And though audiences probably wanted to see his reaction, it said more about how queerness was treated in the early aughts than it did about audiences’ wants.

The kiss was exploitative — there’s no doubt about that. Because same-sex desire wasn’t commonplace on TV in 2003, the pop stars relied on the shock factor of the girl-on-girl smooch to elicit reactions — and they certainly succeeded, seeing as how we still talk about it 15 years later. The kiss wasn’t coming from a place of honesty, or as a show of queerness — it was performative. It was designed to be consumed and whispered about and splayed across gossip rags. For those reasons, it was also for men. Cutting to Timberlake — while another girl-on-girl kiss was happening — proved that men’s reactions were more important than the actual display of female desire. It was the male gaze at work, and that sucks.

But as I said, the moment had some serious positives. Sure, it was meant to be gratuitous and provocative, and yes, lesbianism shouldn’t be used to cater to the male gaze, nor should it be seen as shocking or an aberration. But it was also awesome for queer women to watch. Today, I know it’s hard to imagine a world without the queer works of Cate Blanchett, but 15 years ago, queer visibility in TV wasn’t just scant, it was nearly invisible.

By 2003, queer women were barely starting to make landfall in television. Willow and Tara broke ground in Buffy the Vampire Slayer, which was one of the first series to portray a lesbian relationship that wasn’t bogged down by harmful stereotypes. Ellen DeGeneres had come out as gay on her self-titled sitcom, and Jennifer Aniston had kissed Winona Ryder on Friends for no reason. Still, genuine lesbian desire was barely visible. Like everyone else, queer women want more than just saccharine love stories—they want hot, steamy sex. And by 2003, queer women had barely seen depictions of their own sexual cravings on TV. So, when Britney, Madonna, and Christina collided on stage, on live TV — it was memorable. And it was hot. Problematic undertones aside, it actually blazed the trail for future sexy gay TV moments.

So, while the smooch wasn’t perfect, it still mattered. Who cares if it was silly? Sometimes sex is frivolous and fun and shallow, and that’s fine; those are also things queer women want to watch on TV, along with stories of intimacy and meet-cutes and heartbreak. The kiss pre-dated Showtime’s groundbreaking lesbian show The L Word by one year — and that show certainly satiated all of our sexual desires, as well as all the aforementioned scenarios. But before The L Word, lesbian desire on TV was slim pickings.

There’s a reason that queer millennials remember and revere the 2003 VMAs kiss. For most 90s and 2000s girls, this was the first on-screen show of lesbian desire we ever saw. Plus, all three women were friendly faces to young queers; Madonna was already a gay icon, and both Britney and Christina went on to become major allies of the LGBTQ community.

This year, Xtina performed at LA Pride, while Britney headlined this summer’s Brighton Pride festival. Both women have made significant efforts to uplift the community and normalize queerness, including speaking out against the transphobic bathroom bill in Texas (Britney), and advocating for marriage equality over a decade ago (Xtina).

So, it’s unsurprising that Christina recounted the kiss to Andy Cohen the way she did — in a completely unproblematic manner — because of her bullheaded allyship. She could’ve easily said she regretted not being the center of media attention the next day, or reported feeling shafted by her lack of screen time. But she didn’t.

She said, “I definitely saw the newspaper that day and was like, ‘Oh, well, I guess I got left out of that one,’” adding: “I had my own performance that night, it was ‘Fighter’ with Dave Navarro, and it was a kick-ass performance, so I was okay with that. She can have the kiss. That’s okay.”

The kiss wasn’t about just Xtina or just Britney or Madonna — it was about a single, fiery, significant moment, what it meant for queer visibility, and the ways in which it changed media. It shone a light on how mainstream media once viewed same-sex kissing as shocking, or unfit for certain audiences.