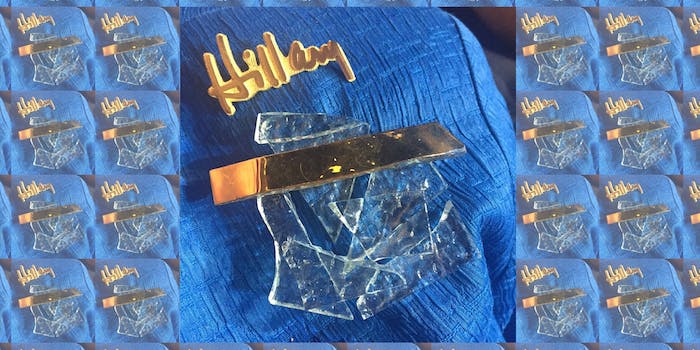 Can we talk about her entire political brooch collection, though?

Former Secretary of State Madeleine Albright was just one of millions watching history take place on Thursday night as Hillary Clinton became the first woman to accept a major political party’s nomination for president of the United States.

But our eyes were also on Albright herself—who had a literal pile of broken glass on her chest, and it was amazing.

The 79-year-old Czech Republic native who served as the nation’s first-ever female Secretary of State under President Bill Clinton knows a thing or two about shattering glass ceilings. Perhaps the epic feminist brooch she wore to Hillary’s convention-closing speech last night was constructed out of her own ceiling shards. Either way, we want a pin just like it.

Albright’s pin and brooch game is so fire that it has its own hashtag: #TweetMyPins. That’s where you’ll find some of the most elaborate political designs ever seen—in fashion or on an iconic diplomat—and many of them are themed to represent women’s rights, LGBT allies, and sometimes, subtly shady opposition to the policies of the nations and leaders she meets with.

After the Russians planted a listening device near her office @Madeleine Albright wore a large bug pin. #tweetmypins pic.twitter.com/9Nvu0NZU2r

Albright’s diplomatic pin collection is so prolific and provides such a fascinating record of her meetings with world leaders, it has toured museums across the country.

In a 2010 interview with Smithsonian magazine, Albright said that she first started wearing brooches while working at the United Nations after the Gulf War.

“During that time, I had something dreadful to say about Saddam Hussein on a daily basis, which he deserved because he had invaded Kuwait,” Albright told Smithsonian. “The government-controlled Iraqi media then compared me to an ‘unparalleled serpent.'”

That’s when it occurred to her that she could express herself through shady fashion accessories without having to utter a word.

“I happened to have a snake pin, and wore it to my next meeting on Iraq,” said Albright. “When the press asked me about it, I thought, ‘Well, this is fun.'”