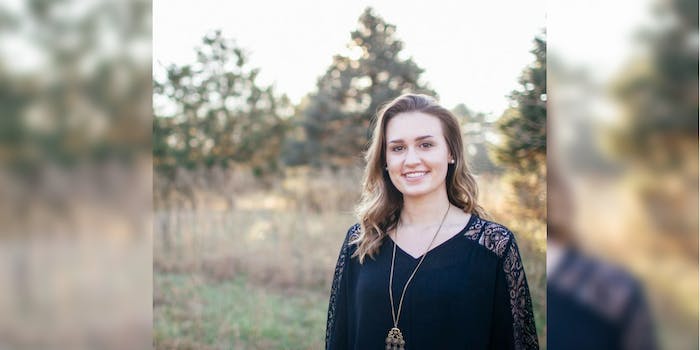 'You can't be pro-life, but then refuse to support the girl that keeps her baby.'

A Maryland teen is being barred from walking at her school graduation because she’s pregnant.

According to the New York Times, Heritage Academy, a small private Christian school near Boonsboro, Maryland, isn’t allowing 18-year-old Maddi Runkles from participating in her graduation ceremony after she violated one of the school’s nine “statements of faith,” a code she signed at the beginning of the year, by becoming pregnant. The point reads, “no intimate sexual activity be engaged in outside of the marriage commitment between a man and a woman.”

“It’s like a small school and it is such a big deal and I am the only one that is not going to be there that night to walk to the stage,” Runkles told local affiliate Fox 5.

Runkles told the Times that she knew she would face punishment when she decided to announce her pregnancy to her classmates, instead of hiding it or having an abortion. And she did. She was forced to step down from her leadership positions at school and stayed home for two days during an unofficial suspension, while the Heritage board—that at the time was led by her father—decided upon her punishment.

But ultimately, the board decided that Runkles, who had a 4.0 grade-point average, served as student council president, and had never been a disciplinary problem, would receive her diploma but be forbidden from walking the stage at graduation. Runkles’ father ultimately resigned from the board, angry about how his daughter was treated. He told Fox 5 that he sees a distinct inconsistency between her punishment and how other students facing similar infractions have been treated in the past.

“Typically, when somebody breaks a rule, you punish them at the time they break the rule. That way, the punishment is behind them and they’re moving forward with a clean slate,” Runkles’s father told the Times. “With Maddi, her punishment was set four months out. It’s ruined her senior year.”

Runkles’ punishment would have remained a private shame to endure had it not been for her and her family’s decision to get help from anti-abortion group Students for Life. Their president, Kristan Hawkins, attempted to convince to persuade the administrator of Heritage Academy, David Hobbs, to reconsider the punishment, to no avail.

Because of this, Runkles’ story reveals a point of contention for Heritage Academy and other Christian schools in how they promote anti-abortion viewpoints but then punish teenagers who choose to keep their pregnancies.

“She [Runkles] made the courageous decision to choose life, and she definitely should not be shamed,” Hawkins told the Times. “There has got to be a way to treat a young woman who becomes pregnant in a graceful and loving way.”

Hobbs, however, declined to discuss Runkles’ situation with the Times, instead sending a statement that stated her pregnancy was “an internal issue about which much prayer and discussion has taken place.”

With just over a week until graduation, Runkles is still unable to walk. But she and her parents will be holding a private ceremony for her graduation the following day, and her classmates are invited to attend.

“You can’t be pro-life, but then refuse to support the girl that keeps her baby,” Runkles told Fox 5.