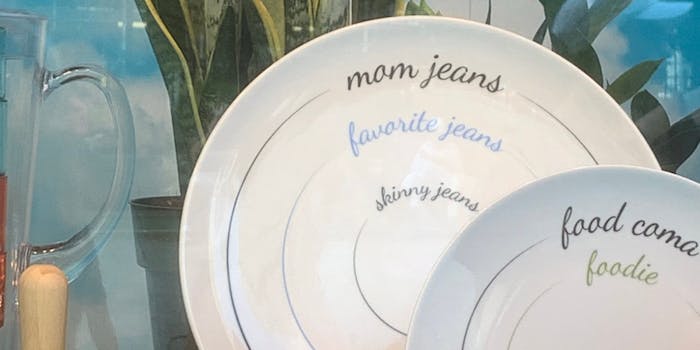 Macy’s came under fire over the weekend after podcast and TV host Alie Ward called the department store chain for carrying plates with demeaning messages about portion control.

The stir began Sunday afternoon when Ward tweeted a picture of two of the plates from the Pourtions collection at Macy’s. “How can I get these plates from @Macys banned in all 50 states,” Ward wrote.

How can I get these plates from @Macys banned in all 50 states pic.twitter.com/1spntAluVl

One plate had three circles, the smallest labeled “skinny jeans,” the middle labeled “favorite jeans,” and the largest labeled “mom jeans.” The second plate in the picture had only two circles, “foodie” and “food coma.”

Many people in the replies, noting that the size of the “skinny jeans” circle was too small to fit recommended portions for a full meal, accused Macy’s of promoting anorexia and disordered eating.

Because it's essentially pro-ana. And as a society we should aim to protect those who are vulnerable.

All these people trying to defend the shitty design… lol imagine thinking a circle labelled "skinny jeans" big enough to hold like two chicken nuggets is demonstrating "healthy portion control"…. The only thing it's teaching is body shaming, and nothing to do with health.

This is a toxic message, promoting even greater women beauty standards and dangerous health habits. These expectations can actually kill someone, and I know someone it has. @Macys, remove this from all of your stores and denounce the manufacturer.

Others joked about how the proportions on the plate simply don’t make sense. Just because something is taking up less physical space doesn’t mean it has fewer calories or is healthier.

The replies were also full of people telling Ward that the plates were “just a joke,” or making body-shaming comments about her and anyone who felt the plates could be problematic.

The idea that it’s all “just jokes” and has nothing to do with unhealthy standards for women simply doesn’t hold up to scrutiny when you compare the ladies’ plate to the men’s plate. While the men have two portion sizes—“manicotti” and “man overboard”—the third, smaller portion on the women’s plate implicitly pushes the idea that women can and should eat less.

But the company behind the dishes, Pourtions, told the Washington Post that its online orders have “tripled” since Sunday’s social media backlash.

Macy’s responded to the criticism within the day, saying it would pull the products from all their stores. In a statement to the Daily Dot, a Macy’s spokesperson stated, “We apologize to our customers for missing the mark on this product. After reviewing the complaint, we quickly removed the plates, which were only in our STORY at Macy’s location in Herald Square.”