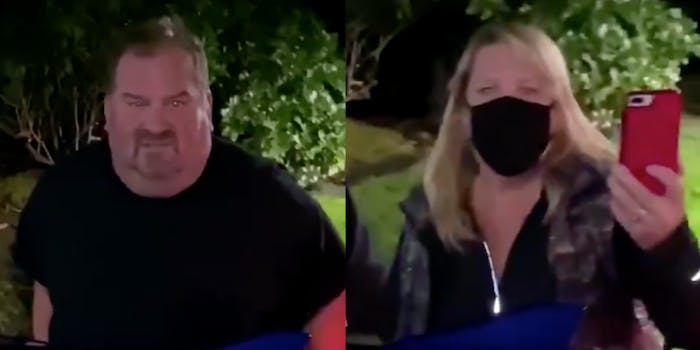 At one point, his wife even tells him to 'stop,' but only because she's 'videoing.'

The Lyft rider who went on a racist rant against a driver who asked him to wear a face mask is now apologizing.

According to the New York Post, both the rider, only identified as “Joe,” and his wife lost their jobs and got evicted from the house they rent since a video of the incident went viral.

“There really is no context to the incident,” the rider told the Post. “My behavior in the video was despicable.”

A video of the incident shows Lyft driver David Kangogo kicking the rider and his wife out of his car after the man took off his mask and refused to put it back on. The rider then goes on a racist rant, repeatedly calling the Lyft driver a “f*cking sand [N-word].”

The man even threatens to “p*ss” in the car.

The man’s wife, who is recording the incident on her phone, can be heard in the background. At one point, she even tells him to “stop,” but only because she’s “videoing.”

After the rider repeatedly refuses to put on his mask, Kangogo drives off.

According to KomoNews, Lyft permanently banned the driver from using the app. The rider’s employer also fired him from his job.

In a statement, the rider apologized for his behavior and fessed up for asking like a “complete idiot.”

“Watching the video was hard for me; it was if I didn’t recognize the person. I let myself down,” he said. The rider also asked for “forgiveness and mercy from literally everyone, especially David the driver, the Lyft community, my family and friends and our community.”