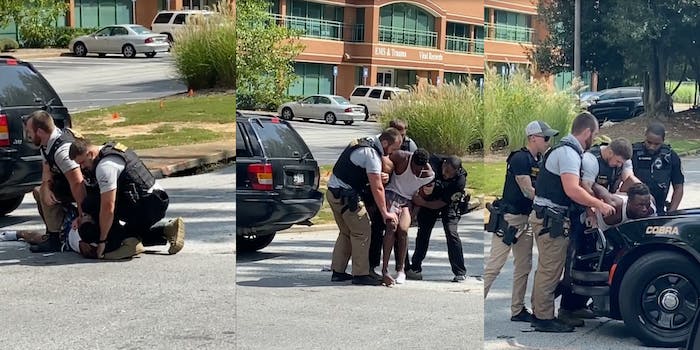 The Lyft driver was pulled over for a broken tail light.

A deputy with the Clayton County Sheriff’s Office in Georgia is on administrative leave after a video went viral of him putting a knee to a Black man’s neck and punching him in the face.

According to TMZ, the altercation happened on Friday. The victim and two friends were passengers in a Lyft that got pulled over because a tail light was out.

That’s when the deputy reportedly told the man to “get out [of] the car.”

The video shows a Black man on the ground with two deputies on top of him. A deputy later punches the man repeatedly in the face, drawing blood.

A young woman in the video screams at the deputies to stop, to which the deputy responds, “He’s biting my hand.”

As the deputy presses the man’s head into the pavement, he screams, “I can’t breathe” and “I’m gonna die!” The man was seemingly arrested.

According to a press release, there is an investigation underway in what police described as “a video posted on social media involving a Deputy using physical force on a man.”