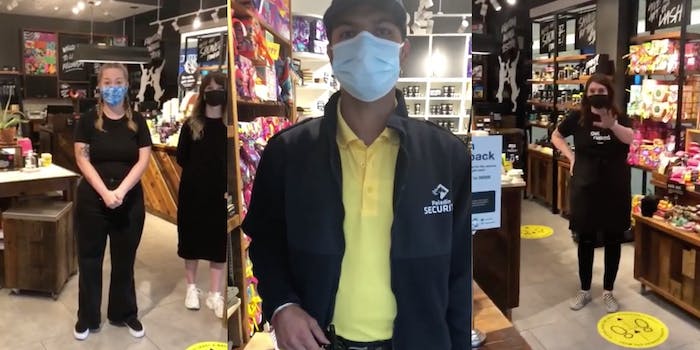 In the video, she also equates anti-masking to human rights.

Many anti-maskers still can’t seem to figure out that private businesses have every right to refuse them service.

An encounter between a Canadian anti-masker and very patient Lush employees is gathering traction on social media as yet another example of a “Karen” thinking she’s entitled to do whatever she wants.

The Karen in question recorded the video herself, and subsequently posted it to her Facebook. At the time the video starts, mall security has already showed up to support the three Lush employees.

“Explain to me how my human rights, with my medical condition, cannot walk through the store, when it’s perfectly fine for me to walk through a store?” the woman asks. The near-incoherency of the question is an omen of all that is to follow.

The security guard explains to her that wearing a mask is store policy and that the woman, like all customers, has to abide by that.

“But it’s their store policy. If they’re asking you to leave their store, they have the right to refuse you service,” he explains.

“I’m not causing a harassment,” the woman says.

After one of the Lush employees contradicts the woman’s claim, the security guard informs her that if she doesn’t leave after being asked multiple times, they are going to have to call the police.

“Do you understand that you’re breaching my human rights?” she again wrongly insists.

After complaining about “commie intimidation,” insisting she knows her “constitutional human rights,” and falsely claiming that a Lush store is “public property,” she is eventually somewhat placated when an employee gets her the number for the company’s head office. She leaves the store with a fake polite “Have a good day.”

Those who shared the video to Reddit said the woman who caused the scene also had pro-Trump commentary on her Facebook page and added that the incident took place in Kelowna, British Columbia.

After watching the back-and-forth, people were eager to explain how much was wrong with her claims, starting with the part where it seemed like she was getting her anti-mask rhetoric from American anti-maskers.

People also pointed out how “polite” she was—and how that clearly doesn’t change the fact that she was ultimately really awful.

While she was obviously confident enough that she was in the right to post this to her Facebook initially, the anonymous woman has subsequently removed the video, reportedly after receiving more backlash than she anticipated.