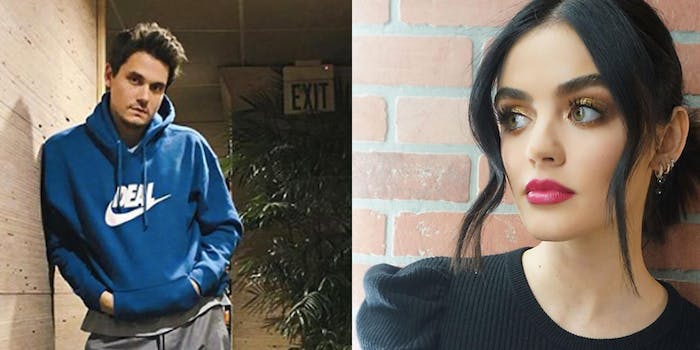 'I pressed yes for him.'

In a recent interview with Cosmopolitan, Lucy Hale opened up about her dating life—and about being low-key rejected by John Mayer on a dating app.

While it’s a little strange to think of celebrities swiping through dating apps to find their next potential love interest, Hale says she jumped onto a VIP dating app (that wasn’t even named because of how VIP it is) after finally growing out of her “bad boys” phase.

“I used to be really drawn to, like, damaged people who had been through some shit,” she admitted. “Now, I’m like, ‘You can be nice but not boring. Nice but not a dud.’”

But old habits die hard, seeing as how her subsequent foray into the world of dating apps saw her trying to match with John Mayer, whose reputation when it comes to dating doesn’t necessarily paint him out to be a great partner.

“John Mayer is on [the app]. And I pressed yes for him, but I don’t think he pressed yes for me,” Hale said before addressing his reputation. “I’m so drawn to musical talent, I don’t care.”

Mayer has made headlines recently as Jessica Simpson, who he dated back in 2006, prepares to release her memoir on Feb. 4. Interviews have already revealed that she discusses him frequently throughout the book, calling their relationship manipulative and saying he was obsessed with her in the worst of ways.

It’s yet another stain on Mayer’s long and tumultuous dating history, which includes past relationships with Katy Perry, Jennifer Aniston, and Taylor Swift, whose song “Dear John,” about being manipulated by an older guy, is reportedly about him.

So as disappointing as rejection always is, it seems likely Hale dodged a bullet by never matching with the “Your Body is a Wonderland” singer on the mysterious VIP app.

“When I was younger, I was constantly wanting to be with or date someone because I was so deathly afraid of being single or by myself,” the Pretty Little Liars star said. “Now, I’m at the point where if I meet someone, they better really elevate my life, because I love being single.”