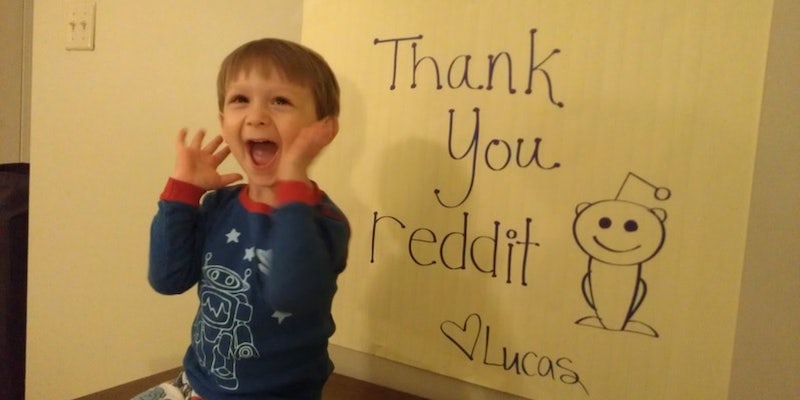 Lucas Gonzalez's family won't go to the poorhouse when he goes to the hospital, thanks to the generosity of strangers.

The family of a three-year-old suffering from a rare blood disease will avoid financial ruin as he endures six months of treatment, thanks to members of Reddit, the social news site.

Within 12 hours of posting a to the social news site, the family of Lucas Gonzalez essentially met their goal of $50,000 in donations. More than half of that came from Reddit—$31,000, to be exact.

“Thank you all again SO SO much for what you did,” wrote redditor ironyx, who launched the Reddit fundraising drive yesterday (and is dating one of Lucas’s relatives). “We still can’t believe it.”

It’s a great example of the Reddit community’s power, and as the Daily Dot observed yesterday, its ability to give voice to the voiceless.

“This is my proudest moment as a redditor!” wrote backpackwayne, who moderates the r/assistance community, where the fundraising campaign began.

As expected, Luis, the father of Lucas, hosted a live a live question-and-answer session on Reddit last tonight, and Lucas did indeed make a guest appearance.

Asked by Ocrasorm if Lucas would “rather have Super Strenth or be able to become invisible,” Lucas apparently flexed his muscles in response. “He didnt have an answer for why,” Luis wrote, “just keeps flexing.”