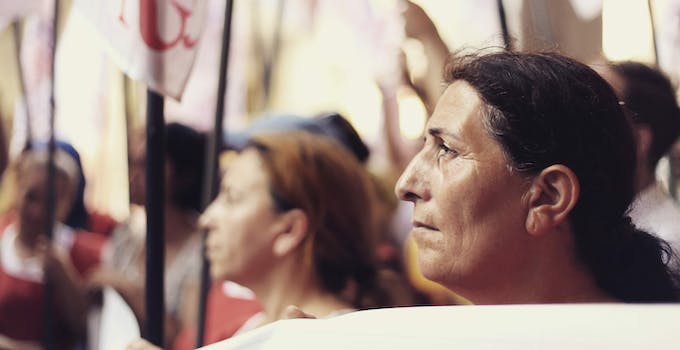 The sexual harassment reckoning needs to happen for low-wage workers, too

This isn't just a problem for women in entertainment and media.

Over the past two months, the media has portrayed our country’s sexual harassment and assault problem as a many-headed hydra of famous men. Cut down a Harvey Weinstein and Louis C.K., and a Matt Lauer and a Roy Moore will grow in his place. In a way, Time naming “Silence Breakers” its Person of the Year was a signal it’s time to kill the beast, seal the wound, and move on in 2018.

Except that’s not how cultural change works. Harassers, assaulters, and rapists have always been around and always will be. Just because a “reckoning” has taken place in political and creative-class positions, it doesn’t mean the outrage will “trickle down” publicly. It’s easier to pen an article exposing a famous harasser than it is to attempt to enlighten cis men to the rampant abuses felt by low-wage, low-visibility workers for centuries. While Taylor Swift poses for cover stories, many of America’s laborers suffer in silence.

Our current discussion about workplace rape culture is disturbingly class-skewed. Oppression, unlike many things in this country, doesn’t discriminate. Just because a harassing diner cook didn’t serve as a senator or an inappropriate retail manager didn’t direct a Marvel movie, it doesn’t mean that these allegations do not deserve air. In fact, they deserve more. The more vulnerable a worker is to these power dynamics, the more she has to lose.

Last year, a Chicago hospitality workers’ union surveyed nearly 500 members who work in the city’s hotels and casinos about sexual harassment. Over 60 percent of female workers reported being sexually harassed at work. Even worse, 58 percent of hotel and 77 percent of casino workers had been harassed by a guest; 49 percent of hotels workers had experienced a guest answering their knock naked.

Then there are those who work in food service. A 2014 survey by Restaurant Opportunities Center United, 66 percent of female restaurant workers reported “high levels of harassing behaviors” from their managers, 80 percent reported it from co-workers, and 78 percent from customers. In fast food, a 2016 survey by public opinion research firm Hart shows that 40 percent of workers are sexually harassed, and 42 percent of those who experienced harassment felt forced to accept it to keep their jobs. Of those who did report harassment, more than one in five said they were retaliated against for doing so.

In agriculture, a field never sexy enough to make the news, a 2012 Human Rights Watch report found sexual harassment and violence are common themes for women who work in U.S. farm fields, “fostered by a severe imbalance of power between employers and supervisors and their low-wage, immigrant workers.”

Since fear of individual retaliation is real—speaking up will likely result in being fired or punished, rather than an Atlantic op-ed—why haven’t these victims banded together to report workplace sexual abuses? Well, they actually have.

In February, Dollar General was sued for the second time by the Equal Employment Opportunity Commission (EEOC) for gender biases—the first resulted in a $19 million settlement. In May, the EEOC sued Applebee’s over alleged abuse that included comments about an employee’s breast size and the manager com­paring salad dressing to his semen. In August, Ford Motors payed a $10.2 million settlement to African-American female employees subjected to sexual and racial discrimination in assembly plants near Chicago. A sexual harassment lawsuit filed by the EEOC against Chipotle included a male employee being locked in meat freezer this September. Also in September, the EEOC sued IHOP for a slew of abuses, including “subjecting employees to a hostile work environment based on sex” and requiring sexual harassment complaints to be filed within 72 hours of the incident. And, after nearly a decade of jumping over forced arbitration hurdles, hundreds of female employees of Signet Jewelers (Jared and Kay) were able to file a class action sexual harassment suit.

To reiterate: Ford, Applebee’s, Chipotle, Dollar General, Signet Jewelers, IHOP. They don’t have movie project in the works or single dropping next week. They’re major corporations who have faced federal sexual harassment lawsuits in 2017. And they are just as noteworthy as the Hollywood men who have been fired and boycotted and publically shamed. Worse yet, there are many, many smaller restaurants and retailers filled with employees who put up with terrible conditions because they can’t afford to go without a paycheck and people in positions of power use these basic needs against them.

So what’s to be done? First, we, the media, need to amplify the voices of the working class by running stories, investigating tips, and exposing labor abuses from every walk of life—not just on Hollywood film sets. The communal shame, violence, and retaliation against these workers are life-threatening, and press about protests, actions, and boycotts can put pressure on employers.

I’ll start by shining a light on the conditions that bring a popular food to your grocery store: Driscoll’s, the world’s largest berry distributor with production on six continents, has had widespread allegations of ignoring worker complaints of workplace sexual harassment and rape for the past four years. After boycotts of their berries mounted and the hashtag #BoycottDriscolls trended, Driscoll’s began allowing collective bargaining negotiations with workers in Northwest Washington. But this change in workplace culture only occurred at one farm. So when news outlets announced that the boycott was over in Washington, the public rejoiced that the berry corporation had changed its ways. But working conditions remain terrible for Driscoll’s berry pickers in places like California and San Quintín, Mexico. Just last week, as wildfires raged in Oxnard, California, workers were forced to keep picking berries amid the blaze and without masks. Allegations of sexual violence and child labor on the San Quintín farms are frequently posted online, but the berry corporation refuses to hear arguments for collective bargaining from workers.

#Farmworkers don’t get the day off. #Driscoll’s strawberries on Harbor in Oxnard are ready for picking despite the #ThomasFire. Few masks pic.twitter.com/59osDAMuck

Second, labor unions need to recognize that sexual harassment is as much a worker’s issue as things like wage theft or workman’s comp. When unions don’t take harassment seriously, they send a message that unions aren’t for women, but when they do, change happens: Following the aforementioned Chicago study on hotel workers, the union petitioned local government to allow hospitality workers to be outfitted with “panic buttons” that inform hotel security of possible threats. The ordinance was passed this fall, and all Chicago housekeepers and anyone who works alone with a hotel guest will have access to them.

If forming a union is out of reach, there are other ways to create strength in numbers. In Seattle, last week, domestic workers (nannies, housekeepers and care workers) from many households banded together to launch the Domestic Workers Bill of Rights, which hopes to include “off-the-books” laborers in protections against wage theft and sexual harassment.