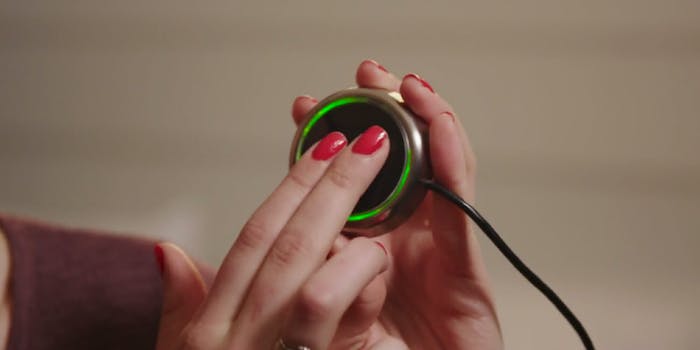 LoveSync represents the worst of sextech

We don't need to 'solve' rejection.

“The only set of buttons designed to get you laid,” the Kickstarter reads, detailing how the real-world nut button will help you: “Enhance your romance. Increase sexual frequency. Avoid awkward rejection. Improve romantic communication.”

when u and gf both smash that button pic.twitter.com/v4aQlxB8Oc

3. “every morning I wake up and open palm slam the lovesync button five times in a row” pic.twitter.com/6iljGQYfyy

LoveSync is marketed as a device that can help couples who are in love but have disjointed sex drives. It’s supposed to be a simple, painless, no-strings-attached way to tell your partner that you want to have sex, but without facing rejection. Just press the button, see if your partner presses it too, and let the love-making commence.

“When you’re feeling like you could be up for gettin’ down, you anonymously tap your button,” the Kickstarter explains. “Your desire will be stored for a set time period. No risk of rejection here, and no pressure on your partner—if only one of you tap, nothing happens.”

LoveSync’s “consensus window” comes in increments. Tapping once means whoever pressed the button is ready to have sex for the next 15 minutes. Tapping twice means consent is stored for two hours. The system goes as high as 24 hours, with five taps for a full day. So don’t worry folks, if you’re horny 24 hours a day, LoveSync will let your partner know that it’s time to fuck whenever. And if you want LoveSync in your sex life, you can jump on the opportunity now with a set of LoveSync buttons for $44 if you’re a “Super Early Bird,” $50 for an “Early Bird,” $57 if you’re just a regular Kickstarter backer, and two sets of buttons for $109 in total.

“We are confident that thousands, if not millions of couples will realize benefit from using LoveSync in their relationships,” the Kickstarter notes.

Look, let’s not beat around the bush here: LoveSync makes zero sense. Consent isn’t a concrete, unwavering greenlight within an allotted amount of time. Sexual consent can be revoked spontaneously and unexpectedly, from an uncomfortable comment in bed to a hairball from your pet cat. LoveSync doesn’t recognize how consent ebbs and flows, though. It’s a binary: if you’re “on,” then you’re not “off.” For couples struggling with sexual compatibility, LoveSync will only cause more miscommunication between a couple, especially if one person’s idea of “pressing the button” is different from another person’s idea of “pressing the button.”

Tapping a sex button to let your partner know that you want to nut doesn’t actually deal with the underlying issue at play here, either: communicating that need. Couples that want to have sex need to talk about having sex, even if it’s a quick check-in and confirmation before getting down to business. On the other hand, couples fighting about sex because they’re experiencing a dead bedroom, awkward rejections, or incompatible sex drives aren’t really fighting about sex. There are much bigger issues at play underneath sex, from entitlement to your partner’s body to feeling unwanted or unattractive. These are serious conversations that need to happen for a relationship to survive. Luckily, there are solutions to these problems, but pressing a button to get permission to do the horny is encouraging less communication, not more.

To be fair, LoveSync acknowledges a lot of this. On the company’s website, it stresses that the device “IS NOT INTENDED TO REPLACE ASKING YOUR PARTNER FOR OR TALKING ABOUT SEX,” emphasis theirs, not mine. Instead, the button is designed to encourage partners feeling interested in sex to have more sex, even if neither person feels like making the first move. But its explainer acts as if LoveSync is the only way to encourage couples to initiate sex more, instead of teaching lovers how to navigate, accept, and appreciate rejection without reading too much into it or leaving one partner feeling guilty for saying “no” to the other. Rejection is just a part of life, but LoveSync wants to solve it instead of teaching couples to welcome it.

That said, there definitely are ways in which the LoveSync could help people have sex. For particularly shy or socially anxious partners, the LoveSync might make the first move a little bit easier, especially if there’s some trauma involved around sex. In a non-normative, non-monogamous setting, the LoveSync could totally work at sex parties and speed dating sessions too: press the button if you’re attracted to the person you’re chatting with, and if they press back, go ahead and figure out the next step. Then there’s some interesting kink and fetishism applications for the device. Press the LoveSync to ask permission from mistress to cum, anyone?

But there are better, cheaper, and more practical solutions to each of these issues, from talking about anxiety before sex to building your own kink devices. And besides, LoveSync clearly wasn’t built for any of these means. The Kickstarter solely focuses on a heterosexual couple, with absolutely zero gay, lesbian, or poly couples appearing on the campaign. Its marketing acts as if LoveSync will wish away all those awkward communication issues couples need to talk about too: “With LoveSync there’s no rejection, no guilt and no missed opportunities.” But is it really that bad to deal with rejection?

LoveSync isn’t the first technology that’s struggled with consent. LegalFling is a mobile app that lets users draft a “legally binding agreement” for sexual consent that, depending on your country, may hold up in court. On the analog side of things, there’s also Sex Doll Official, which lets users recreate their late lovers as sex dolls by submitting a commission request through the internet. Suffice to say, it’s just flat out creepy to turn your late partner into a plastic sex toy that you can cuddle and fuck as much as you want. And while both approaches are doing different things in the sex tech work, they run the risk of doing more harm than good by misinterpreting consent and sexual autonomy (or, in the latter’s case, a lack thereof).

While LoveSync claims its technology leads to partners being “more willing to talk about” their sex lives, the device’s values de facto minimize communication between partners, substituting enthusiastic consent for smashing the nut button and hoping for something good in return. LoveSync doesn’t outright say this, but it’s steeped in rape culture for that reason. It’s one of the reasons why the device has received so much scrutiny over the past two days: It simplifies consent to the point where it abandons the nuance and complexity that needs to be part of having sex.

I just read the sentence "With LoveSync there's no rejection" and if that isn't negating the option of revoking consent AT ANY TIME I don't know what is.
Don't do this shit to your partner please. Learn to accept rejection. https://t.co/LBYJEJs2cR

LoveSync: "whoever said communication is definitely part of a healthy relationship was stupid and dumb, here's a sex summoning button" https://t.co/3FHmQy1xtk

I love to anonymously trigger my horniness device in the hopes that my partner has also triggered their horniness device and that the patent-pending lovesync technology finds consensus in our sexual desire spectrum ratings.

this is literally just the prisoner's dilemma for sex https://t.co/zIcJSEonRH

sex needs a hell of a lot more communication than just a button-presshttps://t.co/5Gwxniz57z

You can talk about sex, or you could develop technology that substitutes introspection with mashing a button to fuck. That’s one of LoveSync’s biggest design flaws. And it represents a much bigger problem with mishandling consent in sexual technology. If the mainstream adult tech world wants to create products that help foster healthy and consensual relationships, then it has to do away with some of the troubling beliefs that fuel its worst products. And the nut button is a great place to start.