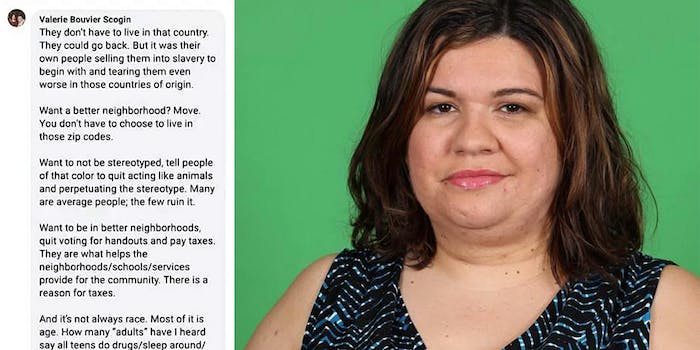 The teacher said people of color should ‘quit acting like animals.’

In a racist Facebook rant, a Louisiana high school teacher minimized the history of slavery and said that Black people should “stop acting like animals,” angering parents who saw the post and who then reported it to the school.

Slidell High School mathematics teacher Valerie Scogin made the now-deleted Facebook comment on a graduate’s post last week, according to the New Orleans Advocate, essentially taking a tour through basic racist talking points. Screenshots show Scogin seemed to think she has a solution for all Black people’s woes. Her first suggestion, “They don’t have to live in that country, they could go back,” essentially boils down to “go back to Africa.” The post continues to go downhill from there.

Scogin blames Black people for slavery, saying “it was their own people selling them into slavery.” According to the Root, and history experts in general, this is a massive oversimplification based on one of many ways people in Africa were enslaved.

Even if not to Africa, Scogin still thinks moving is the easy solution to a lot of problems. “Want a better neighborhood? Move,” she wrote. “You don’t have to choose to live in those zip codes.” This, of course, ignores racism in real estate, housing, and home loan-lending, as well as plays into the ideals of Jim Crow segregation. To improve a neighborhood, Scogin suggests people of color should “quit voting for handouts and pay taxes.”

The part that drew the most ire is when Scogin played the “there are stereotypes for a reason” card. “Want to not be stereotyped, tell people of that color to quit acting like animals and perpetuating the stereotype. Many are average people; the few ruin it,” Scogin wrote.

The racist victim-blaming caused parents to call in complaints to the school. A teacher who thinks that racial stereotypes are justified is an obvious cause for concern for student wellbeing and equal access to education.

A representative for St. Tammany Parish Public Schools told WWL TV that they are taking the “appropriate disciplinary actions.” It is unclear what those actions may be, but it was noted that Scogin did not take time off from teaching.