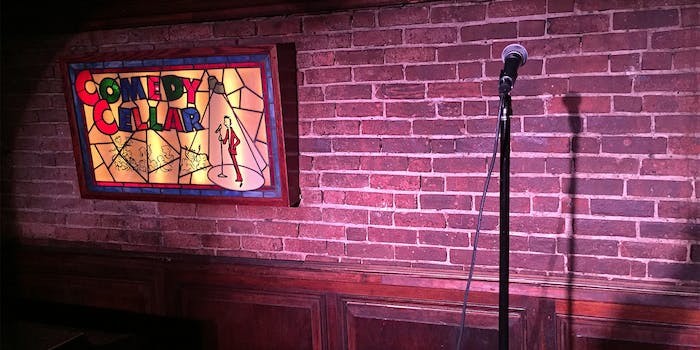 No, Louis C.K. didn’t ‘serve his time’ for admitting to sexually harassing women

The comedy scene outside the Cellar has spoken.

And yet, having spent a majority of the past year in whatever rich man’s New York City hidey-hole is afforded by multiple network deals, C.K. returned to the comedy scene by performing an unannounced set at the Comedy Cellar in Lower Manhattan on Sunday night. The owner, Noam Dworman, told the New York Times that C.K.’s 15-minute set consisted of “typical Louis C.K. stuff,” such as on racism and tips. No mention of his sexual harassment of female comics, it would appear.

While the club reportedly gave C.K. an ovation and “greeted him warmly” before he started his set, one audience member called the club wishing to have been informed of C.K.’s set beforehand and given the decision whether to attend. That minority attendee appears to represent a majority of the internet, however, which has responded strongly against C.K. seemingly innocuous reintroduction into comedy.

“Louis C.K. getting a standing ovation for dropping in to a comedy club less than a year after admitting to sexual misconduct tells you all you need to know about how society applauds powerful men for doing less than the minimum of decency,” Aparna Nancherla, another standup comedian, tweeted.

Journalist Dan Solomon, who broke the Baylor football sexual assault scandal with writer Jessica Luther in 2015, argued that C.K., even before admitting to longstanding rumors regarding his harassment of female comics, was able to flourish in his career by stifling the careers of the women he harmed. While the club owner, Dworman, said he didn’t find it to be his place to be a “gatekeeper,” Solomon encouraged others to express their disinterest in funding C.K.’s rise to unearned redemption.

“This is the subtext of every Louis CK story (and it always has been, even when we didn’t know it). His career has always been a zero sum game that required a bunch of women not to have one,” Solomon wrote. “Him being on that stage keeps them off of it.”

I know two of the women Louis CK harassed and they scrubbed their entire social history because of threats. So, you see how this works out.

If you are at a comedy club or a music venue and a celebrity accused of sexual harassment or assault like Louis CK shows up for a surprise performance, it is your ethical duty to LEAVE. Walk out. Punish him, and the business that hosted him, by removing your patronage.

This in-denial gatekeeper concept in regards to sexual harassers—that the people in power who can enable a bad actor’s behavior (such as club owners, promoters, producers, and more) shouldn’t tell the bad actor that they aren’t allowed back into their previously banished workspace—is complete bullshit. By allowing C.K. back on stage, regardless of the reaction of the audience, is gatekeeping itself by closing the door to performers who would otherwise feel safe working in an industry, or market like New York City, if it weren’t for C.K.’s presence.

In saying, yes, C.K. can stay, people in power are again indicating that the careers of women who have been harassed by him, and of women who would otherwise want to safely share a space with any male comic, cannot. Once again, women are costed an opportunity for these seemingly neutral positions taken by gatekeepers who would rather protect a harasser than uplift the community he has worked to oppress.

Furthermore, it’s pathetic to put the onus of responsibility on audiences to decide whether C.K. is allowed to come back. Comics drop in on comedy clubs to try out new material all the time, but allowing an admitted sexual harasser to drop in on an unsuspecting audience can be troublesome for some—such as the audience member who called to complain—and traumatic for others. As Solomon wrote, audiences now have a tremendous opportunity to voice their dissatisfaction, but it’s a problem that people who don’t want C.K. to come back so soon—his targets, other survivors, and allies—must be the ones to affect this change in the first place, instead of having decisions to keep comics and audiences safe come from the top down.

But getting people to understand the harm that C.K. has done—not only to the women who were sexually harassed and had their careers shut down, but to the comedy community as a whole—is easier said than done. Michael Ian Black, for example, tweeted praise at C.K.’s attempt to return to the comedy scene, writing that people such as C.K. should be allowed to “serve their time and move on with their lives.”

“I don’t know if it’s been long enough, or his career will recover, or if people will have him back, but I’m happy to see him try,” Black wrote.

Will take heat for this, but people have to be allowed to serve their time and move on with their lives. I don't know if it's been long enough, or his career will recover, or if people will have him back, but I'm happy to see him try. https://t.co/QmqdGJnIjy

Black went on to defend his statement, clarifying that he meant that he doesn’t know “when” is the right time for sexual harassers to return to their previously earned status in the workplace, nor what apologies from or retributions toward the harasser justify the return. Regardless, it’s a bold, half-brained statement, saying people who’ve hurt others in their industry should, at some point, be allowed to rehabilitate their image and return forgiven. It completely assumes that, between a career drop-off and a return, a harasser has “served their time,” as Ian wrote, and made their peace with the people and community they’ve harmed. It’s a proposal that tells us to run before we know how to take this next step.

Black, to his credit, wrote that we’re in uncharted territory, and we don’t know how to go about rehabilitating sexual harassers back into the workplace. Uncharted indeed, but allowing C.K. to be around the community he’s hurt, without asking how exactly he’s “paid” for his behavior and the careers he’s cost, aside from toiling away, unseen from the world, probably isn’t the solution. And that’s also assuming that a reintroduction into the industry comes without additional consequences for the people around him. To some, C.K.’s literal removal from comedy is a “workplace safety issue,” as comedian Ian Karmel tweeted.

A reminder: Almost every major publication ran pieces last fall and winter suggesting that MeToo would irreparably damage the careers of even innocent men. https://t.co/5rbDIHzD80

It's more important for men to get a "second chance" than for women to get a first chance. That's basically what all of this boils down to.

To be completely fair to C.K., it seems like the industry, one Comedy Cellar performance aside, really does not want him back. (The Comedy Cellar, a magnet for tourists and visiting family members of New Yorkers, also isn’t necessarily packed with audiences who feel any sort of way about the entertainment industry’s Bad Men.) Across Twitter, comics have weighed in to say that, no, they are not ready for C.K. to make a comeback.

So you've admitted to sexually assaulting comedians in a work culture where fellow people of power took actions to keep the victims not working and quiet about the offenses so that you could make millions and keep working. HOW DO YOU ATONE FOR YOUR SINS? A THREAD OF SOLUTIONS.

Many wonder "how long" Louis CK should be "punished" for before he's "allowed to do comedy."

2) For non-famous men, each count of indecent exposure and false imprisonment (which CK's admitted to) carries a sentence of ~1yr in jail

Hey dudes If I worked at Enterprise Rent a Car and found out my co-worker Gary was jerking off at other coworkers and then he tried to walk back through the front door less than a year later I’d be like “get out of my Entrrprise you fucking weirdo.”

The playbook on “redeeming harassers” may not exist, but C.K. and other men who are itching to get their careers back are in no position to write it.