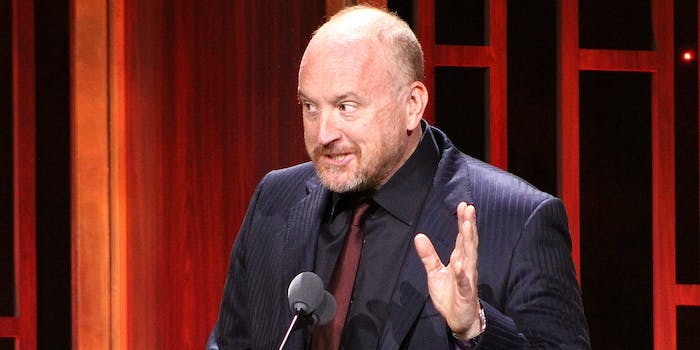 With Louis C.K., millennial men are finally forced to reckon with rape culture

Condemning Weinstein was one thing—but what happens when men find out their hero is an alleged creep?

“It fucking depresses me that this comes from experience rather than an outsider perspective,” Greg, 29, tells the Daily Dot.

C.K. is just the latest in a long list of powerful men who have been accused of sexual harassment or assault in the past month. In many ways, these nonstop reports have been a loud wakeup call for the segment of America who wasn’t already woke. Many men knew that women faced harassment, but they didn’t know that every single woman on their Facebook feed had been harassed until #MeToo. The “casting couch” had always been a punchline, but no one understood how devastating abuse of power really was in Hollywood until a new actress started coming forward every 10 minutes to say someone had harassed or assaulted her. With each new accusation lobbed at Harvey Weinstein, Kevin Spacey, and James Toback, we swiftly and collectively decided these men were despicable. But what about men whose work deeply resonates with us, whose self is their work?

Previous generations of men have responded with ambivalence or total avoidance when it comes to criminal accusations of their artistic heroes like Woody Allen and Roman Polanski. But for women, accusations of sexual assault can’t be so easily shrugged off. They resonate: One in three women will be victims of sexual or physical violence. You can’t look away or avoid an accusation when it hits you in a visceral, personal place. It didn’t take the Times piece for women to condemn C.K.; many have been turned off from the comedian since those first rumors began circulating in 2012.

How millennial men will process the Louis C.K. allegations could be the greatest turning point in our country’s reluctance to face rape culture. He’s far from the only celebrity at the center of the recent media flurry, but his cult-like status among millennial comedy fans and the nature of his work mean, for the first time, many young men are being forced to deal with a fallen hero and decide what it means when a great artist may be not only a shitty person, but also a criminal.

The impossibility of separating the man from his work

One of the particular aspects of the Louis C.K. allegations is that it’s difficult, if not impossible, to separate the man from his work. In cases like Spacey, men were quick to point out that acting is literally about pretending to be someone different—a flimsy excuse at best. Others argued that we don’t, as a society, avoid products made by major companies if a single person in the company was found guilty of a crime.

“They are all hideous humans who abused their respective positions of power, and should rightly be demonized,” Rupert, 29, tells the Daily Dot. “But should their actions completely nullify the hard work of all those people involved?… These people should be held culpable for their actions, but in no real other areas do we seem to suggest the only action is to boycott everything touched by them. I love Parks and Rec, but should I now not watch it because Louis C.K. was in a few episodes? I guess, ultimately, as a consumer, I feel somewhat powerless to effect change or hold people to account. So, therefore, what is a rational response?”

You can see the internal struggle, the justification. Justification that I too am tempted by, especially when shows like Parks and Rec are brought up. But this line of thinking is also a deflection. Standup is not an ensemble sitcom. Yes, there are people involved in production. But in standup, the comedian is everything. It’s their thoughts, their ideas, and, in the case of Louis C.K., their jokes about disturbingly similar actions to what they’ve been accused of. Standup is supposed to reveal truths and unearth hypocrisies, which makes Louis C.K.’s material feel twisted and brazen.

With C.K., art is the person. You can’t look away.

Two months ago, Louis CK had said his accusers were spreading “rumors.” His fans continued to revere him. Under pressure, he has now confessed and awaits patiently his redemption. There is a script, and men know it by heart.

For others, it’s been an easy choice to condemn C.K. and stop supporting his work. “I wouldn’t say I was surprised—there have been rumors about him for a while now,” James, 30, tells the Daily Dot. “I think I stopped watching him a year or two ago when I heard about them, it wasn’t a conscious decision, but I just stopped finding him funny.”

However, even James is still grappling with what power we have as consumers and if it makes a difference at all. “[Men like C.K.] are only being punished now because they got caught, not because they did it in the first place… The public is having to act as judge and jury here, which will inevitably lead to some people suffering from false accusations and others who are guilty never being punished because it wasn’t ‘exposed’ by the right journalists or at the right time. Uncovering these crimes is a good thing, but ultimately we’re only dealing with the individuals, not the problem itself. So while I’m happy that people are coming forward, I’m disheartened more every time because it’s clear we’re only scratching the surface. Once public interest wanes, these guys will go back to doing what they’ve been doing.”

Though in some cases, that may be a disturbing truth, this reasoning also reads as a throw-your-hands-in-the-air-type loophole—one that men have been using to keep watching C.K. until now. Titans are toppling because people are finally listening, finally responding. Spacey was dropped from his latest projects. Harvey Weinstein’s latest film made only $742 at opening. C.K.’s catalog of specials has been pulled at HBO and his new film won’t likely see the light of day. We can do something.

The dangers of hero worship

We can’t ignore the role that hero worship played in all of this. For a comedy fan, it would be difficult not to adore Louis C.K., who was given a seal of approval by critics and fans alike with his sold-out Madison Square Garden performances and an Emmy-winning TV series. But, as it’s been said before, that level of reverence creates a barrier—a barrier between that person and the world, between that person and decency, that person and consequences for their behavior. It gives them impunity—impunity that can only be countered when the allegations are so large, so abundant, and so convincing that there is an Icarus-inspired fall from grace. If we hadn’t made someone like C.K. a hero in the first place, maybe he would have been held accountable a long time ago.

Even among those who accept the criminal nature of the activities, there’s a hesitancy to make a judgment. “If they’re guilty, we can totally put them in the stocks and publically throw rotten tomatoes at them,” Alex, 30, tells the Daily Dot. “But until they’re proven guilty, we should show the respect we’d show someone who’s presumed innocent. I’ll wait till they’re arrested and tried, and decide when I find out if they’re guilty.”

Legally, of course, you should be innocent until proven guilty. But, in the words of C.K. himself, “When a person tells you that you hurt them, you don’t get to decide that you didn’t.”

It seems, at least, this generation of men is considering that.

“We can’t bury our heads in the sand anymore and say, ‘Oh but they’re great artists,’” Greg says. “There has to be a clear line. Steve Jobs was renowned as a horrible person to work for. But you can argue a megalomaniac perfectionist is good for business. This shit is different.”