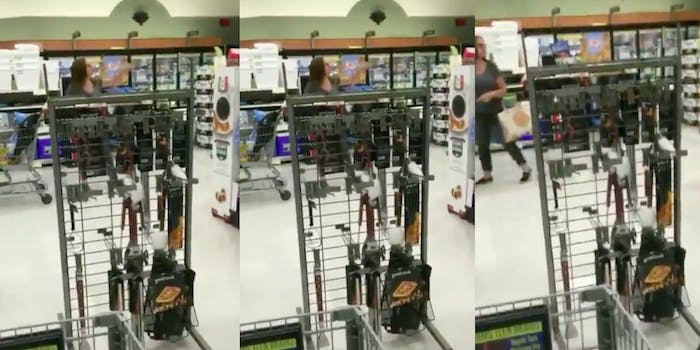 'We live in America, don’t give me none of this Communist crap.'

A “Karen” from Massapequa, Long Island berated a grocery store worker after they told her to put her mask on while shopping.

The video captured by a shopper has circulated on Twitter and has more than 118,000 views.

“We live in America, don’t give me none of this Communist crap,” the woman can be heard yelling at the grocery store worker.

The worker replies, “Are you serious? Because I asked you to put your mask on?”

The woman then yells at the worker telling them that she was wearing a mask. The worker then asks the woman to get out of her face and the “Karen” yells even louder, “Shut the fuck up, you fat bitch! You’re a fat fucking…that’s why you work in a supermarket, you dumb fuck!” She then begins to walk away, still without a mask.

The worker can be told telling her coworkers to take her cart and not to let her check out, and the Karen then shouts back with a threat, “I’ll beat the fucking shit out of you!”

The two continue their screaming match for the remainder of the video. It is still unclear how the altercation ended, and neither of the people in the video has been identified.

Someone claiming to be the employee’s daughter commented on the Twitter post, explaining that her mother was adamant about the customer wearing a mask not only for the safety of the shoppers but also the two 70-year-old parents she has at home.

“My mother didn’t deserve to be screamed at for any of this,” the person claiming to be her daughter said. “It’s disgusting when someone can’t respect another’s own safety during a pandemic. Absolutely horrible.”