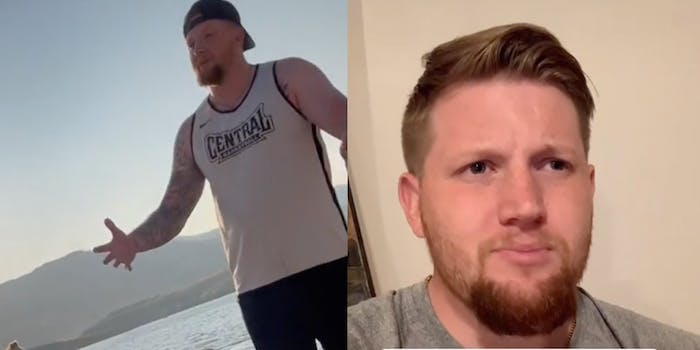 A man who went viral for trying to police women’s bodies on the beach has surfaced with his “side of the story” and has only become a matter of further ridicule for attributing to his behavior to how pornography “destroyed” him as a child.

Logan Dorn shared a TikTok video on Tuesday, which he also posted on his Facebook, and Instagram, receiving backlash on both the latter platforms. The comments section on his TikTok video was turned off, and it’s received more than 151,000 views as of Wednesday evening.

Dorn was responding to a video that went viral on Tuesday where he is seen telling two women that what they’re wearing is “pornography” and they should wear beachwear that “covers [their] body.”

In a video posted on Tuesday, the women said they’re just above 18 years old and were in Fort Collins, Colorado.

Dorn started his video explaining how he was at a reservoir where there were people of different age groups: From adults to teenagers to boys who were 6 to 9 years old.

When he came out of the water, his family insisted on moving because there were “college-aged women here that are showing too much,” he claimed in the video.

“Right there and then, I just had a righteous anger come over me, and also just a boldness by the Holy Spirit to go into confront these ladies, to speak truth that, ‘Hey what you’re wearing is not OK for a 9-year-old boy or a 6-year-old boy,’” he added.

He then cited his reasoning to having been “introduced to pornography at a young age” that he says “destroyed” him.

“And in that moment, the righteous anger to defend and protect young eyes came over me,” he says.

“I’m not going to apologize,” he says, adding that society is fast deteriorating because “pornography and lust is at an all-time high,” and going on a transphobic rant and dismissing non-binary people.

But his takes aren’t landing. His Facebook post is flooded with people either reacting in anger or laughter, and many are commenting with either sarcasm, humor, or sheer dismissal.

Some claimed that he was checking out the women and needed an excuse when he got caught red-handed.

“Dude, your wife caught you staring at other women, and now you are putting up this whole charade to pretend you were staring out of horror for their swimsuits,” commented one person. “You’re a phony.”

“Just admit that you were gawking at women at the beach like a perv and got caught, so you try to make up the reason was because of you being offended by them,” wrote another.

Some retaliated saying God wouldn’t really approve of this.

“The Bible says YOU are responsible for your thoughts, and if your eyes cause you to lust and commit adultery, to pluck them out,” wrote one user. “You don’t blame women, you blame yourself. Learn to actually read, instead of believing what some old white pervs told you to.”

“That boldness was not the Holy Spirit. That was your own perverted, misogynistic, patriarchal bullshit getting spewed all over the place,” wrote another. “God is SO disappointed in you.”

“You have such a twisted view of what the Father calls us to do, this is why people turn away from Christ. This is why people want nothing to do with the church,” commented one person on his Instagram video.

He continued to double-down on his own points, with follow-up videos on his social media.

In one follow-up video, he addressed comments about him being a pervert and that he is possibly a controlling fiance. He said their relationship is based on truth and Jesus and added that it “couldn’t be further from the truth” that he was checking out the women.

He posted another follow-up video where he tried to preach about his religion, trying to defend himself.

“Stop using the Lord’s name to cover up your harassment and sinful actions prick,” commented one user.

Many commented in the videos citing his workplace as a gym in Colorado. When contacted, the manager said he does not work at this location or any of the other nine locations the gym has in the state. The manager said their location has been flooded with calls all day about him.

Dorn did not respond to the Daily Dot’s request for comment.