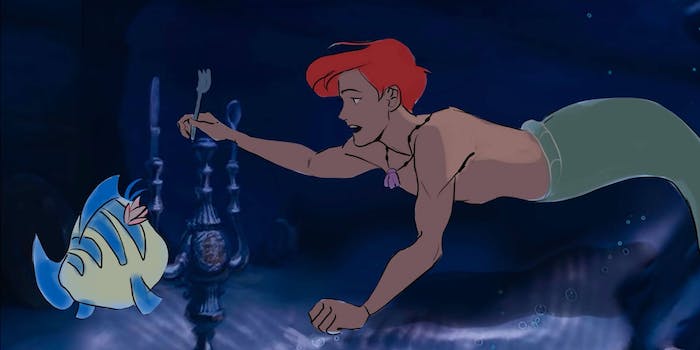 'I didn’t expect male Ariel could be this hot.'

An animator has reimagined The Little Mermaid protagonist Ariel as a gay man for a cover of one of the film’s classics.

Singer Mike Zubio took on a “Part of Your World” around a year ago. Mark Scarnander created the animations to go along with the Zubio’s rendition. Scarnander posted the recreation to YouTube, stating “I have to please the gays.”

Many began expressing that this is the Disney remake they want.

“I VOTE WE REMAKE THE LITTLE MERMAID IMMEDIATELY I NEED THIS VERSION TO BE A MOVIE ASAP,” the top comment reads.

Others, such as commenter Adam Taucher, noted how “there is so much gay subtext behind The Little Mermaid.” As Gay Times notes, The Little Mermaid was based on writer Hans Christian Andersen’s own love life. Andersen was believed to be bisexual, and he wrote the original story after Edvard Collin, his crush, married a woman. Per Pride, literary critic Rictor Norton wrote that Andersen “displays himself as the sexual outsider who lost his prince to another” in the story.

American playwright and lyricist Howard Ashman, who wrote “Part Of Your World,” was a gay man. And Ursula The Sea Witch was based on drag queen Divine.

“Gender-bending Ariel into a man is such a brilliant and really emotional concept,” Taucher added. “Being gay can be a very isolating life for a lot of people, so it makes perfect sense for this character to be a man in this scenario.”

The video even made its way around Twitter, where users responded with virtual applause.

“I didn’t expect male Ariel could be this hot,” one user wrote.