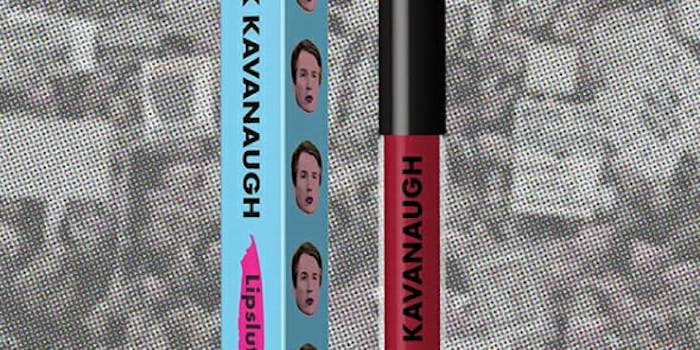 The company behind 'F**k Trump' lipstick has a new shade.

The team behind beauty brand Lipslut has once again channeled its political frustration into a knock-’em-dead lipstick. The message of its new lip shade is simple: “Fuck Kavanaugh.”

Bustle reports that Lipslut, which raised $100,000 to fight immigration policy with its F*ck Trump matte liquid lipstick, came up with the new product after the confirmation hearing for Supreme Court nominee Brett Kavanaugh. His testimony before the Senate Judiciary Committee last Thursday came after that of Christine Blasey Ford, who has accused Kavanaugh of sexual assault.

Lipslut asked for its Instagram followers’ ideas on what color best suited their post-hearing anger.

“The resounding winner was a dark red,” Lipslut founder Katie Sones told Bustle. “After seeing Kavanaugh’s hotheadedness at the hearing, we thought a ‘calm, cool, and collected’ shade would be fitting. Imagine a cool-toned maroon.”

Until Oct. 7, the makeup brand is donating 100 percent of proceeds from its F*ck Kavanaugh shade to anti-sexual assault groups including RAINN, NO MORE, National Alliance to End Sexual Violence, and End the Backlog. The cruelty-free, vegan lipstick is available for preorder and will begin shipping in six to eight weeks.

For many, watching Kavanaugh’s confirmation hearing was a reminder of the ways in which men come to power at the expense of women and how behavior is viewed based on gender. Sones told Bustle that before and during the hearing, she grew “upset seeing women’s voices being ignored, doubted, and flat-out denied.”

“To me, this entire mess serves as a microcosm for how thousands of women’s experiences and traumas are treated everyday,” Sones said. “We had to act.”