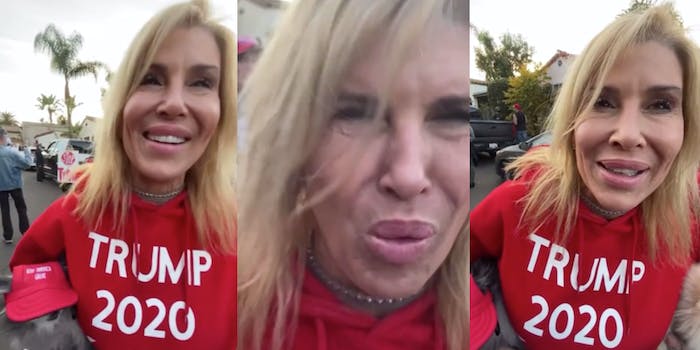 'Her face looks like it's made out of silly putty, chardonnay, and hate.'

Lip Injection Karen attended Sunday’s “Open L.A.” march in Echo Park, California. She and her fellow protesters marched to the home of L.A. County’s public health director to demand the city end its lockdown—one of the only things curbing COVID-19 cases in the populous state.

Counter-protesters met the largely maskless group during the march, prompting Lip injection Karen’s tirade. The confrontation between her and the unidentified person filming was already underway when the camera started rolling.

Karen, decked out in Trump 2020 gear and double-fisting two small dogs and a megaphone, is far from finished. She does take a brief break to argue with other protesters, however, allowing another man to interject. He attempts to rationally explain why he wants the state to reopen.

“Look at this, I had three jobs. They’re all gone,” the maskless man says. “I’m jobless, I’m unemployed.”

“What does that have to do with me being a f****t?” they ask, turning the camera back to Karen.

Karen repeats the slur, smug smile plastered across her heavily made-up face, then asks, “What are you, a guy or a girl?”

“And I’m gonna tell you something else,” Karen continues. “You’re a Nazi and you’re brainwashed by MKUltra.”

Lip Injection Karen goes on to call another person “sick” for having tattoos, refers to the cameraperson as a “liberal piece of shit,” and accuses one person of “having an abortion this morning.”

The kicker for many viewers came when an offscreen person told Karen to “get some more injections.” Karen denied that she’s had any work done, but viewers were unconvinced.

The comment section on Reddit is an absolute bloodbath. People welcomed Lip injection Karen to the r/PublicFreakout subreddit with open arms and vicious words.

“Her face looks like it’s made out of silly putty, chardonnay, and hate,” one commenter wrote.

“Can’t tell which is more damaged, her brain or her face,” another person agreed.

Another commenter guessed that “15 years ago, she tried to be Trump’s wife.”