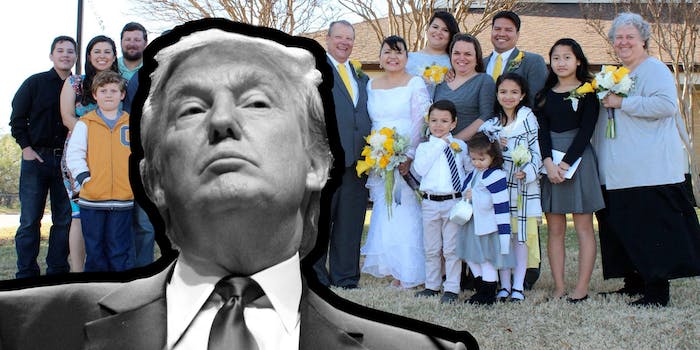 She was brought into the U.S. as a child—and now she may never return.

“Life in Trump’s America” is a series of essays on how the election of Trump is shaping lives, communities, and spaces.

“I can’t even vote, Azul. There’s not much I can do.” My brother’s voice sounds tired from the arguments, the back and forth over any attempt to answer what a Trump presidency means for our divided family.

See, I’m not even stateside. For all the ways the U.S. is woven into the foundation of my being, I am just a deportee. I am in Mexico, with seven years of distance between the U.S. and I.

I arrived in the U.S. as an 8-year-old on a tourist visa. I lived with my grandmother, went to schools in Dallas, lost myself in the super-cool-kid activities of choir and frequenting the library. Years, jobs, and friends stacked up; I was your average low-income Latina—until a babysitting job gone wrong landed me in a police station and with a subsequent ICE date. It was then, at age 22, that I found out I was undocumented.

After three years of fighting my case against Homeland Security, I was given 90 days to pack the entirety of my life and return to a Mexico I no longer knew. I said goodbye to my brother, my sister, my mother, my niece, and my nephew, whom at the time I did not know I would never see again (he died a year ago, at age 7, from health complications). This was in 2009.

That’s right, I was deported under Obama’s administration. Democrats offered no protective shield for the more than 2 million of us deported over the course of eight years in Obama’s White House.

Still, we—those of us in Mexico, those of us who grew up in the U.S. and were then rejected by that home we spent much of our lives in—are affected by Trump’s presidency. I am affected. The day Trump’s victory was announced, the peso plummeted to its lowest point yet. A peso lost here and there, and suddenly, those 60 pesos in daily minimum wage seem further evaporated. The devaluation has already yielded results: Electricity has gone up, gas prices are expected to increase, and staples like tortillas, eggs, and vegetables have already jumped by a peso or two. It’s dozens of remunerative leaks on an unsteady boat.

And it’s not just my pocket book taking a hit; the thin semblance of peace informing my actions, that belief that my family in the states is mostly safe has completely evaporated. Racist crimes have increased since Trump became president-elect. The whitelash that propped him into office has removed any veneer of decency for large numbers of Americans. I think of my brown brother, my brown 9-year-old niece, and my brown newborn nephew, and my body seethes with anxiety. How protected are they? The fear won’t leave me.

“The violent removal that so many fear may have already shattered me.”

People like to think that the relationship between Mexico and America is one-way. But we forget how much America depends on Mexico too. With my eyes closed, I can spout off numerous connective events: the Mexican-American War, the Louisiana Purchase, the National Free Trade Agreement, the 11 million immigrants (large numbers of them Mexican) living in the U.S. and contributing to the U.S. economy, the increasing numbers of Americans gentrifying places like my home here in Merida—the list goes on and on. We cannot escape each other. We have miles of fence attempting to demarcate order, and still, we spill onto the other.

While it is clear to me the harm Trump will do to the U.S. and other countries, others in Mexico believe that what Trump brings is really no different than what we have faced. It is these differences of opinion that surround conversation here, in Mexico, your warmer cousin down south. The day after the election, my social media feed was a bilingual pendulum swinging:

“Hay pierde mas valor el peso- todo va a subir!” (There goes the peso—the price of everything will go up!)

In some ways, those who think Trump’s election doesn’t matter have good points: How many Americans or stateside Latinos were in crisis when Mexico’s Peña Nieto, a plagiarizing, uncultured man with a Telenovela actress for a wife was elected? And the things that are unfair and terrible are still terrible and unfair: Americans continue to move and travel here. I still can’t see my family. I still have to shout, from wherever I stand, that the violent removal that so many fear may have already shattered me.

But I am learning what putting myself together means.

The last few years of my life have been wrapped around activism, feminismo, and what it means to be a forced repatriate. It started with Los Otros Dreamers, a group of deportees coming together through shared stories that became a book. The group has divided, morphed—Dream in Mexico and Otros Dreams en Accíon being a couple of the different branches—and in my case, it has manifested in the form of individual writing, being part of the grassroots movement #TogetherWithoutBorders, and being Skyped into rooms of people in other countries to explain what this exodus aftermath is all about. Within the original group, there are varying amounts of time spent in the U.S.—and, for people like me, of time not allowed to step foot back into America at all.

Three years remain until I can consider applying to return to the U.S. Until then, I am talking to my brother every day.

“I just know that I miss you and I love you,” he tells me. My brother’s voice sounds steady and sure. It is all I can believe in.