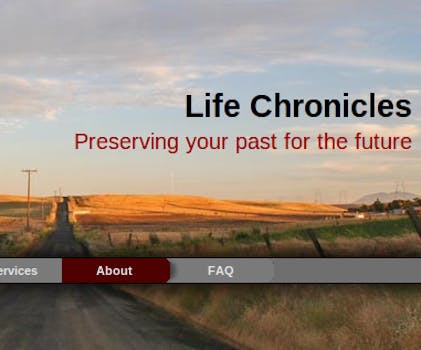 A new business launched on Reddit wants $2,500 to archive your familiy memories, something a non-profit organization with the same name has been doing for free since 1998.

Tol Kocen had a brilliant idea. A memory of your loved ones is priceless, so he was going to start a business selling just that. He’d call it Life Chronicles. You could bring in your soon-to-be-dead relative, and he’d record them as they revealed their most intimate details, their memories and loves and broken dreams.

All he’d ask for was $2,500. Not that much, right? Surely worth it, for something priceless.

Kocen decided to announce his new company to Reddit, a site that’s helped launch a good many startups in the past.

He linked to his site with the title “Longtime Lurker Here. First real post. I lost my father 3 years ago and just started a new company recording peoples life stories for them to pass down. The idea came from the wish to hear his voice and see his face one more time. I would love the support of the Reddit Community!”

That link did fabulously at first, marching up the home page of the massive r/technology section. As its popularity grew, however, his problems started.

There was a small issue with Kocen’s story, redditors quickly pointed out. A non-profit in Florida does the exact same thing for free. Its name? Life Chronicles.  A former volunteer for the non-profit called out Kocen in a comment.

Soon invectives started flying Kocen’s way. He was called a “fraudster” and a “scumbag” and a “terrible human being.”

At first Kocen said he knew about the other organization. Then his story changed:

“I know you don’t want to believe this but I promise you this is a coincidence. I’m was a little worried about the name when I found out more about the NPO. I am now looking into changing my name to something more original. I’m not a scumbag and I didn’t do it on purpose.”

That wasn’t the only curious change to the plot. Kocen’s post title implied his father’s death had inspired him to launch the company, but he later claimed it was actually his grandfather’s death.

Was it all just a series of coincidences, or a fraud?

If Kocen’s not a fraud, then he surely deserves a place in the annals of ridiculously inept businessmen. A quick Google search for “Life Chronicles” pulls up the non profit immediately (it had been number 1, but has since been bumped down to second place, thanks to Kocen’s company). So if it were an accident, as Kocen would like the redditors to believe, then they’ve also got to believe he didn’t do even the most rudimentary research.

If it’s the other way around, then Kocenequally deserves a place in the annals of terrible fraudsters. Reddit is the last place you should advertise anything so suspicious. While the community’s detective work may be a little hyped, the fact is that when a few hundred thousand people pour over your website, it’s pretty much guaranteed they’ll find something wrong.

Life Chronicles—the non-profit—quickly found about Kocen’s company, thanks to flood of Google searches and a tips from redditors. An employee, who identified himself as Derek, claimed their lawyer had already contacted and, barring a response, was ready to file a cease and desist order.

“I wish I could say that this was the first time this had happened,” he wrote, without elaborating.

“I’ve seen what footage like this means to the people we’ve helped, and if others want to start similar groups to do this, then more power to them. I would just ask that he not use the name we trademarked, and after reading a few of his comments in this thread, it appears he intends to change it.”

A day later, Kocen’s site hasn’t changed at all.

We reached out to Kocen for comment but did not hear back in time for publication.