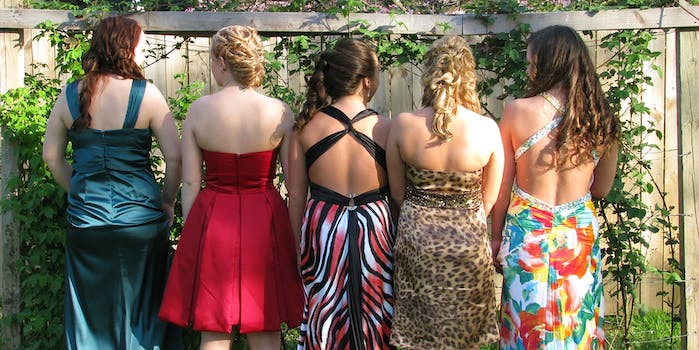 Don't mess with the youth.

Prom is a big part of the high school experience. So when one student was banned by school administrators from asking another girl to prom during lunch, she and her friends fought back with a hashtag campaign, #LetCaseyPromposal. (Yes, a promposal is a thing.)

The hashtag has been circulating since Wednesday, after Casey’s friends tweeted out a screengrab of a DM describing the incident. According to the DM, Casey initially received an OK from school administrators to ask a date to prom with flowers, cookies, and a poster. But they took back their approval and told Casey that she was no longer allowed to prompose in school, as it was “just not appropriate.”

Now, Casey’s friends and even Vine stars like too turnt tina are tweeting #LetCaseyPrompose in solidarity.

The Daily Dot’s request for comment from KISD was unreturned at press time.

Prom tends to be a stressful time for LGBT youth across the nation. Students at other schools have been prohibited from asking same-sex dates and trans students have often been prohibited from running for king or queen. But judging by the outrage over Casey’s blocked promposal, the tide seems to be changing. It does seem to be getting better for LGBT students just trying to have a good time at prom.

In response to recent social media posts regarding “promposals” at our high school campuses, Keller ISD does not grant permission for any student, regardless of gender, to conduct public prom invitations, or promposals, on campus during the school day. Any previous promposals that have occurred have done so without District approval. Promposals, and other similar public displays may create a disruption to the academic setting, therefore they are not allowed for any student.

Photo via Jason Meredith/Flickr (CC BY 2.0)