Stephanie Dorceant claims she was verbally and physically assaulted by an undercover police officer.

It’s a chilly day in downtown Brooklyn, but the marching and the yelling are keeping the small crowd protestors outside Kings County Supreme Court warm. Inside, Stephanie Dorceant, 29, is currently waiting to testify before a grand jury in a closed-door proceeding that even her attorneys are not allowed to enter. Dorceant’s supporters are shouting slogans denouncing police brutality, and playing a first amendment game of cat-and-mouse with the police officers that repeatedly approach the protestors and ask them to move.

Dorceant can’t hear her supporters, loud as they may be in the Friday morning workday sidewalk traffic. But she knows they are there. A few days before she was called to testify about a slew of felony and misdemeanor charges against her, her friends made a Facebook event page calling for people to protest her hearing. A petition circulated online as well, and a crowdfunding campaign raised over $6,000 to pay for medical and legal costs.

The fact that Dorceant is the one being charged is shocking to many. In June, she and her girlfriend Nandi Allman were walking home from a party when they claim a large man bumped aggressively into Dorceant, called her a “fucking dyke,” threw her onto the ground, and choked her until she was close to passing out. Nandi said she was afraid for her girlfriend’s life. In the altercation, Dorceant bit the attacker’s hand to try and get him to release her. 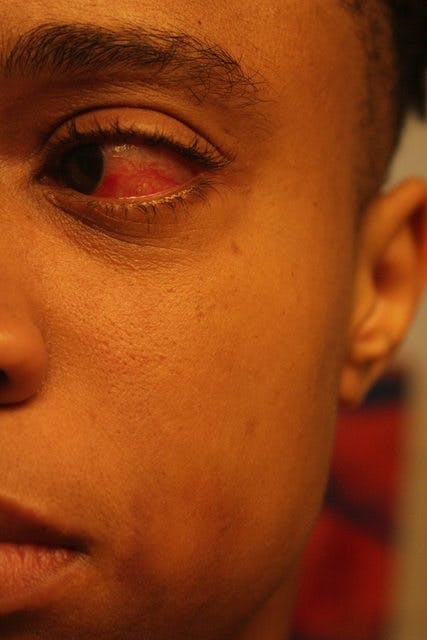 Dorceant, who had never been arrested or gone to jail before, went to Rikers Island prison that night. The man who caused the injuries, as it turned out, was an undercover police officer. He maintains that he identified himself to the couple as law enforcement; both women say he did not. Officer Salvatore Aquino, who has been sued in the past for unreasonable force and false arrest, also claims that he was the one who was attacked—by the 5’6” Dorceant, who weighs about 110 lbs.

“The allegations are absurd,” said Zeman in an interview Thursday. “They’re alleging that my client decided to attack a 250-pound man. She had injuries, broken blood cells in her eye, bruising to her jaw, her clothes were all ripped up. A bite injury is indicative of someone in fear of their life trying to get their attacker off them. No human being attacks someone with a bite—that’s a defensive move.” 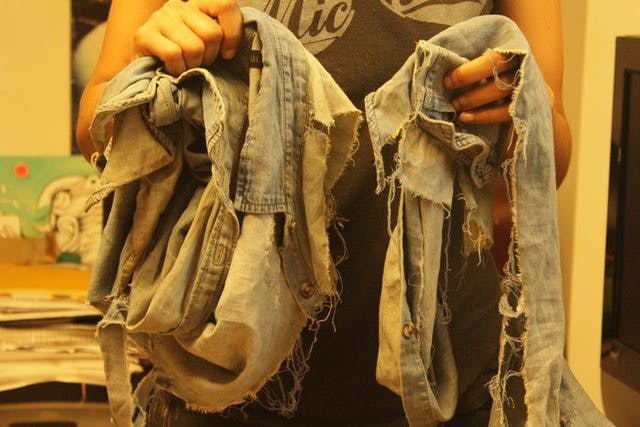 After the incident, Dorceant and her friends circulated photos of her injuries online and held a press conference. News coverage focused on the attack itself, but little attention has been paid to the hefty charges against Dorceant, and the secretive process by which she is being prosecuted (her lawyers will not be told who is testifying against her, and they are effectively locked out of the entire process until they receive a verdict at some unknown point in the future).

“No human being attacks someone with a bite—that’s a defensive move.”

“It’s horrifying that an off-duty police officer can call someone homophobic slurs and physically assault them,” said AJ Feldman, a friend of Dorceant’s and member of the Jews for Racial and Economic Justice’s Campaign for Police Accountability, who was protesting outside the courthouse. “And then that woman ends up at one of the most disgusting prisons in the country.”

In a documentary video about Dorceant that aired on BRIC TV, a 24-hour Brooklyn television network, she described how being sent to “one of the worst jails in America” after being attacked made her question the true definition of freedom. It also gave her an intimate understanding of the police brutality stories that have dominated the news of late, she said.

“I see things through a completely different lens now,” Dorceant said in the video. “I can’t see them the same anymore. They’re not just stories anymore. It’s not just a headline. This is a real thing that’s happening.”

Outside the courthouse on Friday, members of the Audre Lorde Project (a community center for LGBT people of color) and the neighborhood group Equality for Flatbush were also protesting alongside Jews for Racial and Economic Justice and a few of Dorceant’s personal friends.

Imani Henry, a prominent local activist and member of Equality for Flatbush, told the Daily Dot that the public perception of police brutality as something that primarily happens to only to black men is misleading.

“LGBT people have always been targeted by police.”

Henry raised the specter of another recent case of a black woman being attacked by police in Flatbush. In February 2014, attorneys for nursing student Krystle Silvera filed a lawsuit against the NYPD after cops rushed into her home, broke her 10-year-old son’s leg and allegedly sexually abused her. Ironically, the police had come to the house to see if Silvera’s ex-boyfriend was there in violation of the restraining order she had against him for domestic violence. Silvera was dragged out of her home, leaving behind her 5-year-old daughter and the child with the broken leg, and jailed for assaulting an officer. The officers in that case were from the 63rd Precinct, the same location where Dorceant’s incident occurred.

“I don’t know any black people who have not experienced, or witnessed, or seen police assault,” Henry said. “When I flyer in the neighborhood, people come up with plenty of stories. They show me the cuts and scars they have. We know that the level of brutality that happens in our neighborhood is an everyday thing. Police brutality is a normal occurrence in the lives of black people.”

At a White House forum on public policy benefitting women and girls of color last Friday, Andrea Ritchie of the New York organization Streetwise and Safe said that law enforcement officers were consistently in the top three perpetrators of anti-LGBT violence, according to statistics from the Anti-Violence Project.

“In 2010, sexual misconduct was the second-most reported form of police misconduct against women or LGBT people of color,” Ritchie said. “Many of those violent acts take place in the context of calls for help.”

Stories of police harassment and violence are so commonplace among LGBT youth of color, organizations like Streetwise and Safe devote their entire existence to assessing and responding to them. At another local nonprofit for LGBT people of color, the Audre Lorde Project, the Safe Outside the System (SOS) collective meets and shares each week’s list of incidents of police violence among community members. That’s how Tasha Amezcua, coordinator of the SOS project, found out about Dorceant and Allman.

“So many of us at SOS could see ourselves reflected in her,” Amezcua said. “We know that as gentrification increases in our neighborhood, so does policing. But it’s only to keep certain people safe—not queer black people.”

Amezcua says that she frequently witnesses homophobic and transphobic police behavior directly. She recalled a recent trip to do street outreach near the Kingston subway stop in Crown Heights, a primarily black, Carribbean neighborhood in central Brooklyn. Amezcua said that a group of undercover police—identifiable by their gun holsters—stood laughing and mocking the group of mostly trans and gender non-conforming community organizers.

“It’s a whole systemic thing. Tons of our folks experience police violence all the time,” Amezcua said. “One member of our group, a black gay elder, he’s been stopped multiple times just for carrying a cup of coffee down the street. Cops will stop him and ask, ‘What’s in your cup?’”

There’s a nonchalance mixed with exhaustion as each person standing outside the courthouse takes time to explain the rampant abuses they claim to have witnessed in their neighborhoods and communities. It’s hard to imagine the typical suburban homemaker feeling scared to walk home because of the police, but that’s the sensation that people like Henry say is the overarching normal in Flatbush.

“It took Mike Brown’s case, and a rebellion, to bring this to national attention,” said Henry of the shift in public awareness since Ferguson. Now, Henry and others are hoping to keep that awareness alive and to turn it into action in order to protect the Stephanie Dorceants of the world.

“We’re calling for the charges to be dropped,” Henry said. “Even if we have to surround his house and picket, or go to every precinct and demonstrate, that’s what we will do. She was brutally assaulted by the police in an anti-LGBT, anti-lesbian, anti-black, anti-woman, anti-youth attack.

“We won’t stop until she gets justice.”

Update 1:30pm CT, Nov. 23: This afternoon, lawyers for Dorceant told the Daily Dot that all charges against her had just been dropped.