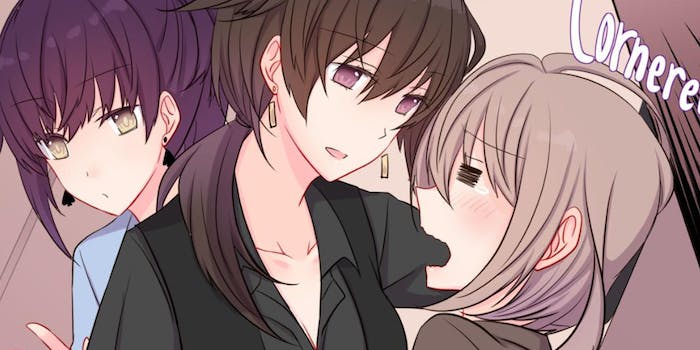 Fall in love in the office or succumb to a lesbian monster girl's lust.

Back in 2012, Kindred Spirits on the Roof shook up the English-speaking visual novel world for offering one of the most heartwarming adult yuri games imaginable. Years later, it’s still a classic, in no small part because its gorgeous 18+ scenes hold up.

Kindred Spirits follows student Yuna Toomi who discovers two female ghosts in love with each other who don’t quite know how to take their affection beyond the spiritual level. Yuna proceeds to foster lesbian relationships among her fellow students in an attempt to help her new ghost friends learn how to become physically intimate. It’s as sweet and tender as it is well-written, making it a must-buy for yuri fans new and old. Grab it uncensored via MangaGamer.

If you’ve ever played Street Fighter IV or Street Fighter V, then you know Taekwondo martial artist Juri Han is an utter babe. She’s borderline canonically queer, too, since she can be seen flirting with the women she’s about to go up against in battle. Criticism aside (games journalist Maddy Myers accurately critiques her as the “depraved bisexual” stereotype), she’s a great fit for some lesbian fanservice, and Juri Yuri Yuri delivers.

In GTS Viper, succubi Carrerra, Mercedes, and Rati find themselves entangled with a human named Ogawa. The three-part original video animation series follows their exploits as all four play a central role in a war between Heaven and Hell. In the meantime, expect plenty of lesbian sex scenes. Most memorable of all is the opening moment where Carrera tops Rati and fingers her before eating her out, and an iconic angelic futanari sex scene during Episode 3’s climax (pun intended).

All three episodes of the GTS Viper OVA are available via a Fakku Unlimited subscription.

Most of our recommendations are relatively tame. Etsuraku no Tane is not. Schoolgirl Murasawa Itsuki attends an all-girls boarding school on her grandparents’ insistence while struggling with the death of her late parents. Then, a tentacle creature possesses her and fills her with the craving to sexually prey on other girls. Classic stuff!