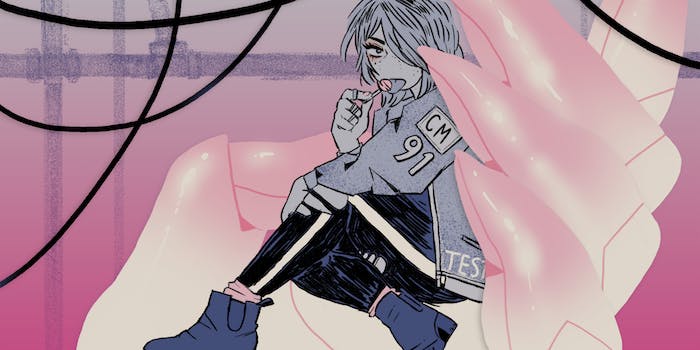 The best lesbian video games—and why you should play them

It’s no secret that lesbians love video games. And these days, there are tons of video games for sapphic women. Some games are built with queer players in mind; others just so happen to perfectly encompass our women-loving-women experiences. Nonetheless, your pickings aren’t slim anymore, whether you’re looking for something sweet and wholesome or spicy and lewd.

So which lesbian games should you start with? Read on for our top picks, from adult titles to RPGs to classic video games.

It’s 1989, and you own an Apple Macintosh computer. On it, you’ve installed the first ever LGBTQ game: C.M. Ralph’s Caper in the Castro. Programmed in HyperCard, this point-and-click adventure title was lost for a time and only recently rediscovered.

In Caper in the Castro, players take on the role of lesbian private eye Tracker McDyke as she searches for drag queen Tessy LaFemme in San Fransisco’s famous Castro. The game, originally released for free over BBS systems, was published as “CharityWare.” Ralph encouraged players to donate to an AIDS fund of their choice in exchange for play.

“In 1988 I had moved from Southern California (behind the orange curtain) to the San Francisco Bay Area. I was so impressed and grateful for the freedom of the LBGT community here as compared to what I had lived in down in SoCal,” Ralph told Paste’s Luke Winkie (Disclosure: Winkie has freelanced for the Daily Dot). “At the time, [its queer representation was] seen as quite an innovative breakthrough. No one had ever attempted creating a game with LGBT characters and theme.”

Caper in the Castro was rediscovered in 2017 and shared onto the Internet Archive, where players can try it out via the site’s Mac emulator. Be warned: as far as point-and-click adventure games go, it’s not the easiest by 2020 standards.

You’re just weeks away from prom, but you’ve got a bit of a conundrum on your hands: what classmate should you ask out? There’s Miranda, the ditzy princess. Polly, the party girl. Or maybe you have your heart set on Vera, the stylish schemer? The choice is yours. There’s just one catch: they’re all monster girls, and you are too. Welcome to Monster Prom, the dating sim multiplayer game where you have to compete with your friends to ask out the (monstrous) date of your (monstrous) dreams!

Monster Prom takes players through the weeks before Monster Prom, where they’ll attempt to hang out with and impress their date-to-be of choice. Build up your stats and answer role-playing prompts carefully, lest you end up single for the big night. And if you’re playing Monster Prom as a multiplayer title, you’ll have to work with (or, more likely than not, against) your friends to pick up the girl you desire most. Monster Prom is not just the perfect multiplayer party game, it’s also a great way to live out that classic high school prom experience if you never had the chance (or, at least, didn’t have one filled with monstrous lovers to meet and seduce). And for bi and pan players, don’t worry: there are plenty of monster boys to date too!

Monster Prom is available for PC, Mac, and Linux on Steam. Nintendo Switch owners can purchase the game on the Nintendo eShop, PlayStation 4 users on the PlayStation Store, and Xbox One owners via the Microsoft Store. For a summer-themed game, consider Monster Prom 2: Monster Camp, the latest in a series of upcoming sequels.

Imagine a role-playing game about witches and wizards in a magical school, but with characters and narrative themes built specifically for queer players. Welcome to Ikenfell, a brand new retro pixel RPG all about “friendship, trust, love and loss,” as the game’s Steam page notes.

Developed by Happy Ray Games and published by Humble Games, Ikenfell introduces players to the titular Ikenfell, a magic school for young witches and wizards. The game follows Maritte, whose famous sister Safina unexpectedly goes missing. In due time, Maritte discovers magical powers of her own, and she joins her fellow students on a quest investigating a sinister set of circumstances befalling the magic world as a whole. Gameplay involves a turn-based RPG world where players time their attacks carefully to execute spells.

Most fittingly for queer players, Ikenfell is filled with queer representation, including lesbian and nonbinary characters. As Ikenfell writer Joanna Blackhart told Game Rant, the game’s script was rewritten and revitalized specifically for far more explicitly queer content. Blackhart’s work also led to the implementation of content warnings (one out of many accessibility features that Ikenfell received praise for).

Purchase Ikenfell for PC and Mac on Steam, via the Nintendo eShop for Nintendo Switch, on the PlayStation Store for PS4, or via the Microsoft Store for Xbox One.

You are going to fall in love with at least one character from VA-11 Hall-A, if not more. That’s to be expected. Sukeban Games’ visual novel VA-11 Hall-A merges tactical bartending with cyberpunk realism in a world all about being queer and surviving day-by-day in a dystopian future.

In VA-11 Hall-A, players serve drinks as Jill Stingray, a 27-year-old bisexual bartender who meets a colorful cast of characters over the course of her career. Most of her patrons are women, and as the game progresses, players get to learn more about their lives, how they make ends’ meet, and their secret hopes and dreams. These range from Sei Asagiri, the friendly, buff security personnel, to fan-favorite Dorothy the android sex worker. Even Jill herself has some stories to share, particularly about her relationship with her ex-girlfriend, Lenore.

Don’t expect much action beyond bartending, but if you’re looking for a story about women surviving and bonding during difficult times, VA-11 Hall-A can’t be beat. Purchase it for PC, Mac, or Linux on Steam, PlayStation 4 and PlayStation Vita on the PlayStation Store, or for Nintendo Switch on the Nintendo eShop.

It’s Hong Kong in the mid-80s, and two women are falling in love. Welcome to A Summer’s End—Hong Kong 1986, a lesbian visual novel all about “seeking identity and meaning in a rapidly changing world,” as the game’s Steam page notes.

In A Summer’s End—Hong Kong 1986, players follow Michelle, a young urban professional who meets a beautiful, unconventional woman named Sam. The two meet and fall for each other. But queer life in 1980s Hong Kong comes with its difficulties, setting the two on an adventure exploring sapphic love and longing between two Asian women during a pivotal time in their city’s history.

“A Summer’s End is a modern romance,” the game’s website notes. “It is a story about seeking identity and meaning in a rapidly changing world where conflicting worldviews and cultures collide. It is a new media homage to Asian cinema and Hong Kong’s golden age of entertainment.”

Interested players can purchase A Summer’s End from Steam or itch.io. For more information about the game’s development, read the Daily Dot’s coverage from earlier this year.

Heart of the Woods is a romantic lesbian visual novel that’s become a fan-favorite among queer women, in no small part due to its fantastic writing and atmospheric plot. The game follows Maddie Raines and Tara Bryck, two queer best friends headed out to a German town to film for Tara’s paranormal vlog. There, Maddie and Tara find something they weren’t expecting: ghosts. Gay ghosts. And love.

Hailed as one of the best Western yuri visual novels in recent years, Heart of the Woods offers over 100,000 words, multiple endings, and a cast of (incredibly gay) female characters sure to delight. Heart of the Woods is available for PC, Mac, or Linux via Steam and itch.io.

Easily one of the most wholesome games on this list, Super Lesbian Animal RPG throws players into a world filled with queer anthropomorphic animals gearing for a sapphic adventure.

Head over to itch.io to give the Super Lesbian Animal RPG demo a try. To support the full game’s development, consider subscribing to developer Bobby Schroeder’s Patreon or tipping her on Ko-Fi.

When Hardcoded began development in 2017, developer Kenzie Wintermelon set out to create something that few others had tried: a trans lesbian adult dating sim. The Daily Dot has covered the game extensively over the past few years, and as time has gone on, its content has only grown more robust, not to mention kinkier.

Best overall: Heaven Will Be Mine

Nothing captures “messy lesbians” quite as well as Heaven Will Be Mine, the second visual novel by Aevee Bee, Mia Schwartz, and Alec Lambert of Pillow Fight Games.

A self-described “queer science-fiction mecha visual novel,” Heaven Will Be Mine combines 1980s alternate universe space mecha battle action with three messy queer women who just so happen to pilot ridiculously powerful spacecrafts. Choose between them and guide their journeys as they grapple with a world increasingly abandoning a utopian future in space. Or just help them make out with each other. The choice is yours, and Heaven Will Be Mine shines in how it takes the sci-fi genre and twists it, penning poignant commentary on sapphic belonging and finding one’s place as a queer woman in a fundamentally unaccommodating society.