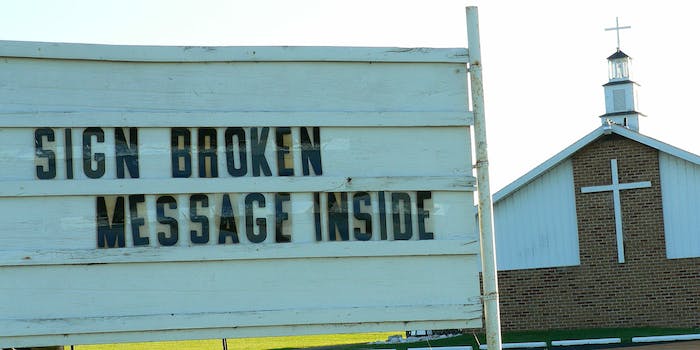 If your church didn’t speak up about Charlottesville, now is the time to leave

Don't stand in silence against hate.

I should have left my church after Ferguson, the death of Philando Castile, and definitely after the massacre at the Pulse nightclub in Orlando. But it was finally the election that broke me. My church, like most evangelical churches in the Midwest, wasn’t afraid to speak out on issues like gay marriage and abortion, vehemently condemning them from the pulpit. The pastor even asserted that his boldness on these issues was demanded by God.

But as black men died by the hands of the police, as gay men and women were slaughtered, and as the soon-to-be president was caught “joking” about sexual assault, there was nothing but silence from my pastor or the leaders of my church. So on Nov. 13, 2016, I left for good.

The Sunday after the election, I had walked into the place I had come Sunday mornings for the past four years, devastated and lost in the midst of the hate and misogyny that had taken over my country. No matter how you voted, the country felt like it was in turmoil—a fault had ruptured between what America could pretend it stood for and what it actually did; many people were grieving, many more were scared. And what I heard at church that day was not a message on unity, faith in hard times, or even hope. Instead, it was a sermon on church growth. It was like nothing had happened in America. And maybe that’s because if you are white, middle class, and living in the middle of the country, nothing really had changed.

My whole life I have attended evangelical Protestant churches. I have been going, even as a liberal feminist, because I believed we were all in this together. I believed that in the end we all valued justice and human life. I believed that even though we asserted those values in different ways, we could unite on them.

I also knew that if I left, it would throw my personal life into chaos. I would lose my friends. Not to mention the havoc it would wreak on my relationship. And since I walked away that November day, I have been called “ungodly” and an “idolater” by the people who should love me most. But the only thing that feels true is that I should have left a long time ago.

My former church is not an outlier “bad” church. It’s just like any hip church you can find in any city or small town in the Midwest. It’s populated with stylish moms and clean-shaven men in flannel who play guitars. The pastors talk about Instagram, the worship has cool lights and really great vocals. The decor looks like a Hobby Lobby vomited all over the place—replica barn wood, faux vintage hooks, exposed beams, a chalkboard that tells you “God is good” and coffee is 25 cents.

Week after week, police shootings after murders after riots, I would walk up the steps, flanked by the reclaimed pipe banisters, and be greeted by beautiful people in really nice jeans with easy smiles. We shook hands, said nothing but “good morning” to one another through our perfect teeth. Our children ran through our legs, in their organic cotton blend outfits, waving pictures that declared “God is love.” We went home and ate lunch. Did laundry. Began our weeks. People died. The world bled. Nothing changed at church.

It’s not as though addressing horrific violent behavior and populations in despair is out of the church’s realm. While federal law prohibits clergy from endorsing political candidates, many still speak out on social issues, like poverty, abortion, religious liberty, and homosexuality. A study done by the Pew Center on Religion and Public Life found that of church-going Americans, two-thirds had heard politics preached from the pulpit.

For white evangelical Protestants like myself, the majority of those messages are conservative, closed off to the perspective that human rights are for all. From the creation of Jerry Falwell’s Moral Majority in the 1970s to the present-day memes asserting Donald Trump is God’s anointed leader, these churches are the bastion of conservative, often far-right, support. It’s a twisted ideology that eschews politics—claiming that political leaders are fallible and our faith lies in God—while also blending politics seamlessly into the fabric of faith, like equating voting anti-abortion with obeying the will of God.

Church is supposed to be a place of community—where together we try to figure out how to live and love and grapple with the great mystery of what it is we’re supposed to be doing. It should be a place that provides harbor from storms, not a place that pretends storms don’t exist. There are many churches in America that will address that the world is unjust and that people need help. I recently started attending one—a small neighborhood church that takes a stand against hate and teaches radical inclusion—and it feels like home.

While every year is trying in its own way, 2017 has put Americans in a generational crucible. If your church has been silent, especially after the white supremacist rally in Charlottesville over the weekend, it’s time to leave. It was time to leave before, but let Charlottesville be your line in the sand. We need to stop warming the pews of churches that are emboldened to be homophobic or that come between a woman and her body—the same churches that are too cowardly to speak out against hate. We need to stop attending places of worship that declare Christianity to be under attack, but say nothing when the very lives of people of color and Jews are at risk.

The continued silence about the policies and politics of the president who was put into the White House by white evangelical voters is nothing short of cowardly complicity. It’s no longer good enough—not that it ever was—to try and separate what is happening in America from your vote, which was perhaps made against abortion or because you thought Trump would fix healthcare. It’s no longer good enough to believe that just because we don’t harbor hate in our hearts we are not racists. The only harbor hate needs is your silence.

You can be Christian and still stand up to racism, sexism, homophobia, Islamophobia, anything that hurts and attacks our fellow humans. In fact, it’s what your faith should compel you to do. All our thoughts and prayers, all our hope, and all our faith aren’t good enough if it also enables hate to flourish.