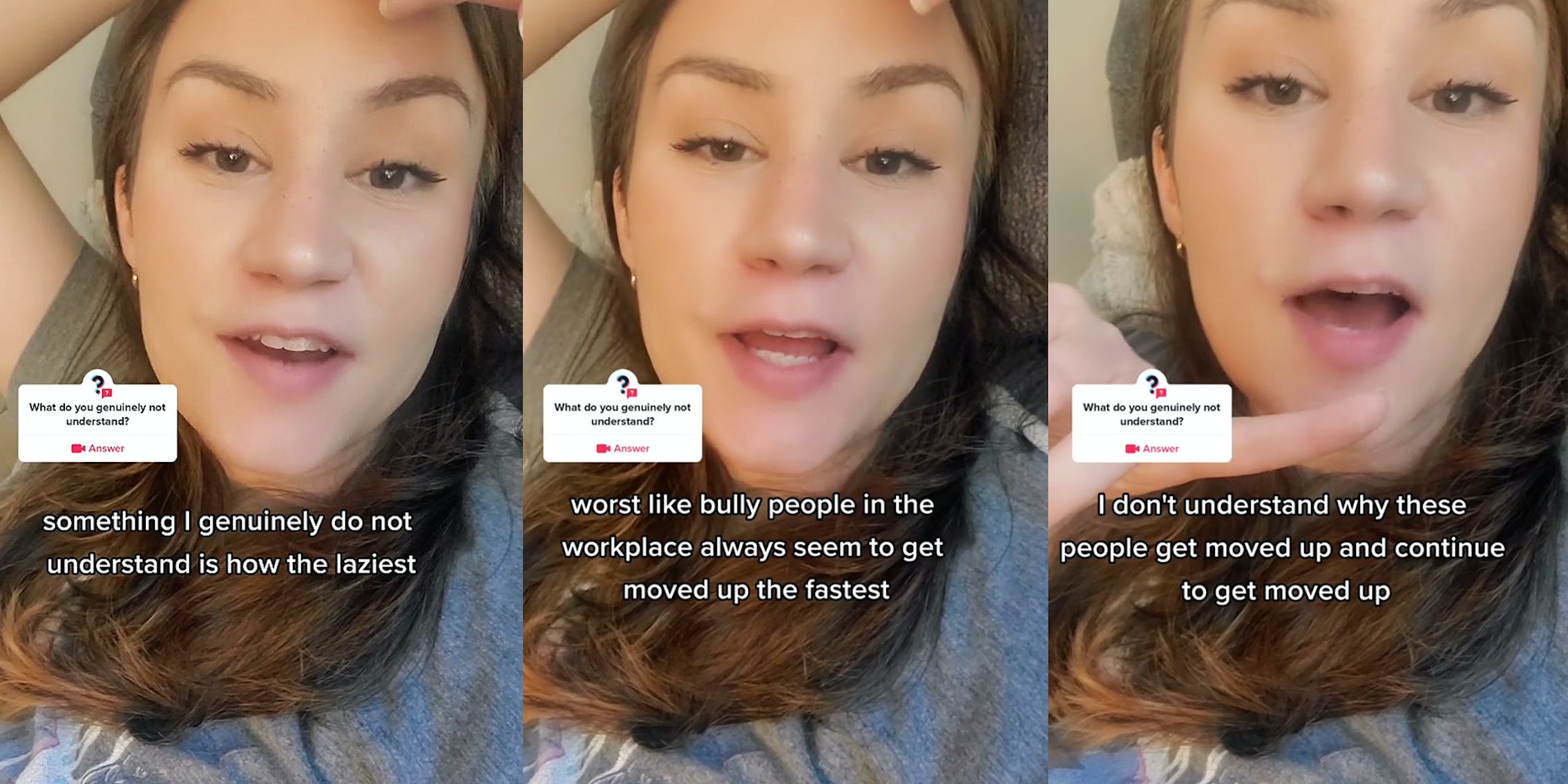 ‘And they don’t get fired either’: Worker says laziest people are always promoted the fastest, sparking debate

'Because it’s usually other bullies at the top moving them up.'

After entering the corporate world, many employees are dismayed to learn that moving up the ranks is as much about politics as it is about work.

A user on TikTok recently went viral after claiming that ‘kissing ass’ was the only way to get a promotion. Another virally claimed that she was given an ultimatum to socialize or risk being fired.

Now, another user on TikTok has gone viral after sharing a complaint about the type of worker who succeeds in a corporate environment.

“Something I genuinely do not understand is how the laziest, worst—like, bully people in the workplace always seem to get moved up the fastest,” says user Amber (@lifeandworkbutbetter). “The kind people, the nice people, the ‘yes’ people, the people that would in leadership treat people like human beings, they don’t like to move those people up.”

As the video continues, Amber notes that she is speaking from experience.

“The minute that I got into a management role and tried to give people mental health days and create the schedules that they wanted and just be cognizant of people having lives, corporate hated it,” she details.

“…I don’t understand why companies never hold these people accountable,” she concludes.

At first, some commenters shared their theories as to why this might be the case.

“It’s bc the people at the top don’t want to see the working class as human,” wrote one user. “They think we are lazy & entitled. Why would they want to accommodate us?”

“Because it’s usually other bullies at the top moving them up,” added another.

“Insecure management will never hire or promote anyone who is smarter or will challenge their place in the company,” another user stated. “They are scared of competent people.”

Writing in an advice column for Forbes, writer Liz Ryan backs up this latter idea.

“[Employers] have a greater fear than their fear of business failure. Their greatest fear is that somebody working near them might challenge them, or show them up for being a dimwit,” Ryan writes.

“Lousy employees get promoted to lofty positions in fear-based organizations because they are non-threatening to the leaders,” she continues. “Non-threatening is the best thing you can be in a toxic environment. It’s the principal job requirement.”

No matter why it happens, users on TikTok agree that the practice is wrong.

As one user wrote, “Lord I appreciate this statement. I left my corporate managerial job. People didn’t matter it seemed. They mattered to me.”

“I think it happens because it’s just easier to do what’s always been done. Because change is hard and in situations like these, it’s often frowned upon to create change to the system,” Amber tells Daily Dot. “Companies fear they will lose profits if they have kind-hearted leaders and not the ‘only results driven’ types.”

Amber explains that the lazy, rude type person not only will “find someone else to do the work, but they also have enough confidence to just state what they want done.”

“Unfortunately, companies see these bully types with all their confidence, bossing people around and think it’s progress,” she adds. “But it drives good people out, in droves. So short term, they may be able to get people to task, but the staff will loathe their jobs, the boss, the company and the turnover will be high.”

However, Amber argues that this type of thinking is short-sighted. “Companies stand to gain a lot more profit if they treat their people well, if they promote good/moral/empathetic people into leadership — promoting people that want to treat their team like human beings and drive results through inspiring not through fear,” she details.

This has more benefits besides a less toxic work environment.

“Happy employees take less sick/mental health days, usually stay longer with the company and are more pleasant to customers — leading them to return and spend more,” Amber explains. “The company profits from having a heart, not a lack of one.”

As for what can be done about the practice of it’s happening in your workplace, Amber advises simply getting out — but as the issue is widespread, she admits this would not solve the problem entirely.

“If I could give any advice [it] would be to work on what you can control, like your own attitude and the caliper of work you’re putting out,” she writes. “And I cannot recommend talk-therapy enough!”

However, if the working environment becomes dangerous, Amber advises to take the problem seriously.

“If things become extreme or there are legal issues involved like SA, harassment, bullying, racism etc. I would document everything, contact a lawyer (in my experience HR is not there to help you), and start applying to other companies ASAP,” she concludes.