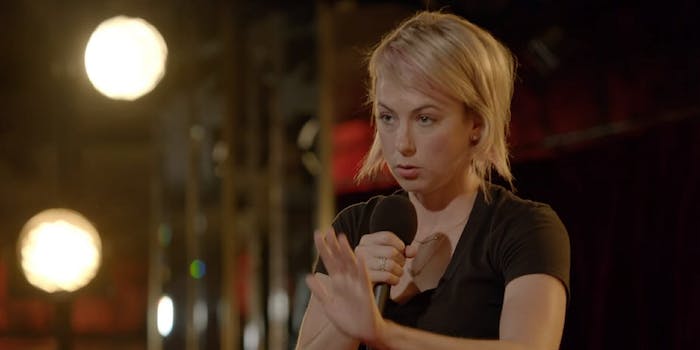 His lawyer is an MRA with a history of representing similar lawsuits.

A man is suing comedian Iliza Shlesinger for discrimination after he was turned away from her “Girls’ Night In” show.

Last month, George St. George bought a ticket to see Shlesinger’s show at Largo in Los Angeles, despite it being advertised as “no boys allowed.” When St. George and another man grabbed their tickets from the theater, an employee suggested that the men could sit in the show’s back row. But once the show was about to begin, the two were turned away from entering altogether. Even though the venue initially offered the men a refund on their $30 tickets, St. George decided to sue both Shlesinger and Largo to prove a point.

The lawsuit, which was obtained by Variety, alleges that California’s various anti-discrimination laws and policies ban businesses from discriminating against men and women “based on their sex” (though many would argue that discrimination is based on historical oppression and power dynamics, which men have had in the upper-hand in since the dawn of time). St. George’s brief also goes so far as to claim that the Largo and Shlesinger “boldly organized, hosted, employed, booked, put on, performed in or at least aided a sex-based comedy show that treated male and female theatergoers unequally based solely on their sex.” The lawsuit even features a quote from Animal Farm on the front to prove the point.

However, this isn’t St. George’s first lawsuit, and targeting Shlesinger is likely politically motivated. Variety reports that St. George and attorney Alfred Rava have a history of filing lawsuits against “ladies’ nights” at businesses, with Rava, in particular, championing 150 cases against such events in California. Rava previously served as secretary for the men’s rights group National Coalition For Men, and he also offers free consultations to members who allege they have faced discrimination to public spaces for being men.

“At no time should an entertainer or an entertainment venue require female patrons or male patrons sit in the back of the theater based solely on their sex,” Rava told Variety.

Men have made headlines a few times this year for getting upset at “ladies only” events. When female redditors from r/Seattle planned to host a women-only meetup, they had to reschedule due to online harassment from men. Most notoriously, there was the women-only Wonder Woman screening at Alamo Drafthouse, which faced backlash from men who felt entitled to attend.

Men: Can’t live with them, can’t create safe space without them barging in.