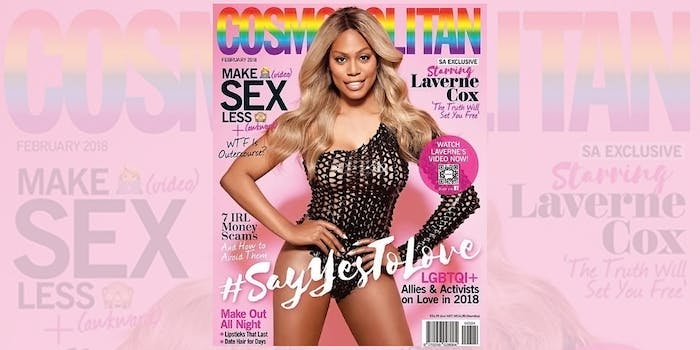 'Trans women deserve to be loved out in the open and in the light.'

Cosmopolitan has a pretty strong track record on speaking frankly about sex and gender. And now its South Africa edition is breaking barriers with its latest cover model, transgender actress Laverne Cox.

Serving as the publication’s first out transgender woman to grace any of its international editions, Cox also talks openly about dating as a Black trans woman in the issue. She stresses that she’s “often been kept a secret” by men because she is transgender, but her gender and sexuality shouldn’t be seen as imperfect or flawed. Rather, she believes trans women should be embraced and treated with respect.

“Trans women deserve to be loved out in the open and in the light,” Cox said in an interview posted on Cosmo South Africa’s Instagram. “My message for Cosmo readers is ‘Let go of fear, and live a fun, fearless life.’ If I can do it, you can do it.”

Cox is also part of the magazine’s February 2018 Valentine’s Day edition, which editor-in-chief Holly Meadows calls an attempt to “disrupt heteronormative ideas around February and Valentine’s Day” and “look at love in 2018–including acceptance of self, others, and non-binary relationships,” according to Paper.