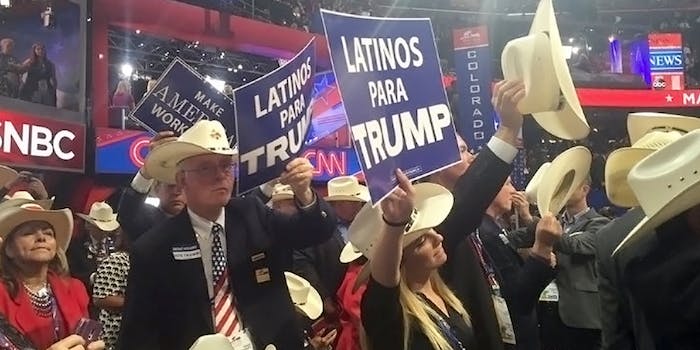 Can we get a copy editor?

Even though Donald Trump doesn’t have the best track record when it comes to Latino issues, at the RNC last night there appeared to be a dedicated group of supporters holding signs that said “Latinos Para Trump.”

Look at these non Latinos with "Latinos for Trump" signs in the crowd LMAOOOOO pic.twitter.com/gkYv8tHWKT

Seems to me like some of these Texas delegates w/ Latinos for Trump signs are not Latino someone is passing them out pic.twitter.com/z8KuCdyqny

Indeed, some questioned whether the group was in fact Latino, though obviously one can be both light-skinned and Latino. The more damning evidence that this group may not be who it claims: Well, that sign’s not Spanish.

This sign doesn't even say Latinos for Trump; that would be "Latinos por Trump" (not "para"). https://t.co/FL4clLugpu

Suggests Latinos are "for" Trump the way that Luke was "for" the Rancor https://t.co/nUYnX4cLWi

The proper grammar for that sign, which translates to “Latinos for Trump,” should be “Latinos por Trump,” not “para.” According to fluent Spanish speakers at the Daily Dot, it’s a common error, especially if Spanish is not your first language. However, it’s a common error that could be solved with a quick Google search.

According to one language guide, “por” is used more when meaning “in support of,” while “para” suggests the object is more of a gift. So unless the Latinos are offering themselves up to Trump for sacrifice, “por” seems to be the proper grammatical term.

The 25k-strong Facebook group “Latinos and Hispanics for Donald Trump” could not confirm the sign holders were part of its group. “We don’t print any material, nor organize any physical events,” said a spokesperson. “Our page ‘members’ are very active and very likely they are part of this group. But in short, the organizers of this page did not print them.”

At the RNC, Latino representation seemed generally low. There were just 133 delegates that identify as Latino present. However, one of them, Kentucky State Sen. Ralph Alvarado, was photographed carrying one of the signs.

Numerous attempts to contact Alvarado about the grammatical snafu were unsuccessful.

Update 11:30am CT, July 22: Includes response from Latinos and Hispanics for Donald Trump.