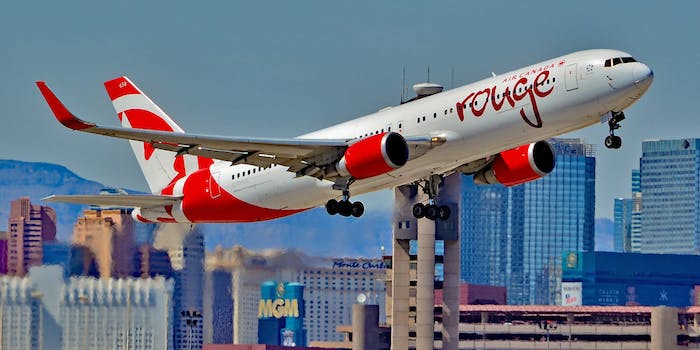 What you smoke in Vegas stays in Vegas.

Las Vegas is kind of the perfect haven for recreational pot smokers. It’s a land of hedonism that encourages natives and visitors alike to indulge their every whim—otherwise known as, well, “Sin City.” Gamblers who win big can light up a celebratory joint, and those who lose big can smoke to forget about their financial woes for a while.

There’s just one thing you can’t do with weed in Vegas: take it out of Vegas.

Thankfully, Las Vegas’ McCarran Airport has devised a solution for smokers who bought a little too much product and can’t take it out of the state with them. The airport has installed 10 large, green trash cans for travelers to dispose of their prescription and recreational drugs before hopping on their flight.

These boxes will help visitors comply with a recent Clark County commissioners’ vote to ban the advertising and possession of marijuana on airport grounds. (Don’t worry, you can still drink and gamble in the airport to your heart’s content.) Bins have also been installed at rental car returns in the hopes that tourists stop stashing their leftover pot in the center console of their Nissan Altimas.

So far, eight states and Washington D.C. have legalized possession of recreational cannabis, but the federal government still classifies it as a schedule 1 drug (the same as heroin). The feds have banned marijuana from secure regions of the airport, so even if you’re making a quick trip from Vegas to Colorado, you still have to ditch your pot before getting on the plane.

Still, this stuff isn’t cheap, so if you’re going to invest, maybe start off with an amount you know you can handle. And if you really overdid it, be a good tourist and give your leftover pot to one of the 7,329 Elvis impersonators you see on the Strip.